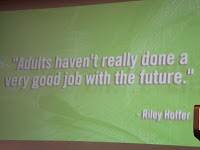 Once (eons ago), I was at the Kennedy Center to see "Phantom of the Opera." Breathtaking!

Once (in a particularly brave era, many moons ago), I was there to perform on-stage, at Christmas, with a choral group I had joined an a lark from a newspaper ad. A trip to France & several cathedral choral venues later, this choir was invited to take part with many other singing groups to be the background singers for Rosemary Clooney's Christmas Concert at the Kennedy Center. (Yes, that would be George's late aunt.) A once-in-a-lifetime, surreal experience.

Then there was last night. 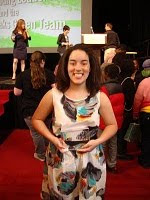 The Kennedy Center has a nightly, free performance in the foyer outside the Concert Hall in their atrium called the Millennium Stage. It is a wonderful way that the Kennedy Center makes the arts accessible to all. Last night, I battled the Tuesday night rush hour traffic to make it there by 6 pm on special invitation from Danelle & Riley Hoffer, who have been special to me since Riley's visit to Eagle Cove School, October '08 for our FallFest where she donated 100 CGKidz stainless steel water bottles and spoke to our ECS community about the importance of "reducing, reusing, and recycling." Did I mention that she was 11-years old at the time, she had just recently started www.CGKidz.com (out of the desire to do something and help kids take action), and we were her very first of many elementary school visits! Since then, she's gone on to share her message to a number of schools nation-wide. 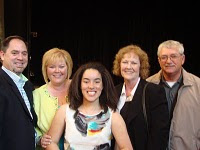 Of the 3 times I've attended the Kennedy Center, each time was moving in it's own way. However, I've got to say that I don't think I've ever been more touched and inspired as I was this week at this event. Here I saw the future. These 11 amazing impassioned young people are the voices of our future. Like a proud mama, I was in awe in a number of ways by Riley's speech (and so touched when she gave me a personal thank you while on stage), and moved by these other 10 fresh and new-to-me individuals who John F. Kennedy Center of Performing Arts,have sooo much vision at such a young age. Here at the a quote by JFK rings out:

"One person can make a difference, and everyone should try." ~ John F. Kennedy

To see and be moved (as I was) by these amazing individuals from the "Must See" Kennedy Center Millennium Stage USGBC/Youth Speaks "Brave New Voices Bringing the Noise for the Earth" event from Tuesday, April 28, 2010, click the title above, or go to http://www.kennedy-center.org/explorer/videos/?id=M4265 to view a video of the performance. Congratulations to all 11 of the USGBC/Youth Speaks young leaders. I'm excited to see where you go, and what you do!