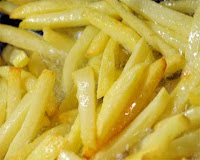 "French fries are a vegetable."
This quote is a quote from the 3rd episode of  "Jamie Oliver's Food Revolution."  Anyone who has watched 2 minutes of this show can imagine Jamie's thoughts on this subject.  And he's right.  It's a ludicrous comment, yet it came from the county's nutrition director because it was "in the book."  It's comments such as this--married with the high schoolers in this episode that were cooking an amazing fundraising dinner--that had Tim Decker, our Eagle Cove School science teacher, comment the following:

"I have to tell you that I really connect with this show mostly because I've been where he's been.  I grew up in that exact same area.  I know these people.  And it really hurts. I tried to change them environmentally and I ran into the same folks and the same ignorance that he's running into.  And it hurts.  But this episode ... where he gets the kids to do things (third graders can't use power tools ... second graders can't pull up a several hundred pound osprey stand ... fifth graders can't build a greenhouse ...)  This one really hits home."

Clearly it's been doing some "hitting home" with me as well.  Since watching Jamie Oliver's Food Revolution, I'm sure it's a surprise to no one that I'm looking at everything I'm eating.  Doesn't hurt too that I wouldn't mind dropping a pound or two. After only 3 episodes (and a slight obsession), I'm finding myself eating a whole lot more fruits and vegetables...and doing a remarkable job of staying away from my kids' Easter candy.
How?  My new mantra is "Do I want that food inside of me?"  9 times out of 10, the answer is no.  The preservatives, and accompanying calories, aren't worth it.  Interesting too, my scale is starting to move the right direction.  So...if/when my resolve & willpower start to waver, may visions of Jamie Oliver & the ludicrous-ness of the comment "french fries are a vegetable" knock some sense back into me!
May it begin to hit home with you too.  And if it hasn't, here's the nutritional value of one 9-ounce bag of frozen french fries:

If you still haven't seen any of the shows, click the title above for Episode 3, or go to http://abc.go.com/shows/jamie-olivers-food-revolution/episode-guide/episode-103/411801
Picture from http://www.ryanseacrest.com/blog/food-revolution
Posted by Vicki at 11:30 PM