There's a ride at DisneyLand (one of the originals to the park since 1955, in fact) called "Mr. Toad's Wild Ride."  That title seems appropriate for my week.  I think I am at the place where not only has the magic and wonder of Disney has crept in, but yes, indeed, it has been a wild ride!!

Tonight I went from being a finalist for the Anne Arundel County Private School Teacher of the Year...to being the actual winner!  At a banquet at the BWI Marriott Hotel, 50 nominated county teachers were honored to ultimately come down to one private school and one public school teacher to be voted to fill the coveted position of "Teacher of the Year." 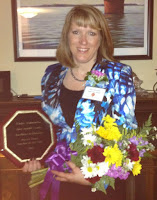 With a crew of Eagle Cove School colleagues, friends, and family members, I found that just being at the banquet made the surreality of it all become a reality. (Likewise for the butterflies in my tummy)!  Upon that Academy-Award-winning announcement when they opened the envelope and pulled out my name, "Mr. Toad's Wild Ride" hit high speed gear!!  I found myself in good company--humbled and honored (beyond belief!)... not only with all the nominees, semi-finalists, and finalists, but also Martha Gardner, the fifth grade Public School winner--a fifth-grade teacher at Belvedere Elementary School in Arnold, Maryland.


To see the 5 public school and 3 independent school teachers who were the final round finalists from Anne Arundel County of the Year, check out Maryland Gazette:  Who Will Win Teacher of the Year?

The application process (which involved a series of essays and requirements for the first round, and another series for the second round, then finally a panel-judged interview), was multi-faceted and lengthy.  One part included an analysis of the Educational Issues and Trends that teachers face.  Here is my essay on that point, and one part of my "wild ride" that led me on my path to tonight's still-surrealistic appointment of "Anne Arundel County Private School Teacher of the Year."

In today’s world, there are many educational trends/issues that affect all classroom teachers. Common Core standards have been adopted by most states. Smartboards, iPads, and “the flipped classroom” are on the rise as motivating teaching tools. Conversely, cursive has been eliminated in over 40 states. Property taxes continue to fund education, which place schools in an unintentional “separate but equal” socioeconomic strata based on zip code. 21st Century Learning integrating the traditional 3R’s and the 4C’s (critical thinking, communication, collaboration, and creativity) has begun shifting the way we teach. This short list is just the tip of the educational “issue” iceberg.

Yet there is a bigger issue afoot. Daily, I drive past a billboard that illustrates it beautifully. On one half of the sign, there is a child’s hand holding a smart phone with a cartooned frog game on it. On the other side, the same hand holds a real frog, out in the woods. The only text: “Unplug!”

In our overly “connected” world, technology has caused our youth to lose sight of nature. Currently, it seems as if our smart phones become outdated faster than we can text each other, update our Facebook status, or play the next Xbox game. With this couch-based computing, insert a rise in self-esteem issues, cyber-bullying, inactivity, depression, and obesity. No wonder First Lady Michelle Obama has made such a commitment to her “Let’s Move!” active lifestyle campaign.

Richard Louv (with his 2005 book Last Child in the Woods: Saving Our Children from Nature-Deficit Disorder) and Governor Martin O’Malley have seen the problem—and its solution. Nationwide, Maryland stands out as being the first state to demand an environmental literacy graduation requirement. When outdoors, we can help our students build connections, sharpen their awareness, observe, collect, measure, write, do math, read, and learn about limited resources and global sustainability. We can approach student motivation and success through a “no child left inside” vision. In doing so, teachers integrate real-world situations as a means of developing critical thinking skills in our students, while immersing them in their surroundings. It is a “win” for all!


Images:  of me: from my camera; "Mr. Toad's Wild Ride" from http://lostworld.pair.com/disneyland/fantasyland/mrtoad.html; "Unplug" from http://if-and-when.com/2012/03/02/fear-of-the-screen/; "Last Child In the Woods" from http://richardlouv.com/books/last-child/
Posted by Vicki at 2:09 AM