As I write this, I looked at the clock....9 minutes ago, 100 years ago, the Titanic (you know the one, that big "unsinkable" boat of days of yore) struck an iceberg. Lucky for all, it was unsinkable. 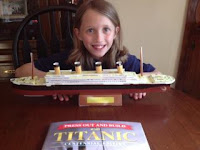 On behalf of true disclosure, I am a Titanic nut. I find it fascinating. I am drawn to it, like a ship drawn to an iceberg. Er, I mean...well, you know what I mean.
Funny too, in the world of "Mini Me," my daughter is following in my footsteps.  Not intentionally, and not by anything I have specifically done...it's just the ways of the world and the circle of life.  (Case and point: About a week ago, she built an amazing model of the Titanic!)

Anyhoo... the historic, gigantic, "Titanic" 100-year anniversary is upon us, along with pomp, circumstance, and the 3D re-release of the 1997Kate-Winslet/Leonard DiCaprio movie. Ranking 3rd in movie earnings this week, it's not too shabby for a fifteen year old movie.
I've written about the Titanic before. This time last year, in fact. The reason I wrote about it last year was more than mere fascination and obsession. It was in regards to the floating plastic that was found near the wreckage site. Yes, "plastic" nearly rhymes with "Titanic." And it shows the pervasive-ness of marine debris in our oceans. It's a problem...a problem of "Titanic" proportions. 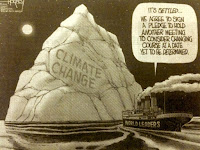 Which leads us to IcebergAhead.  This environmental website has the Titanic in mind. Created by Dennis & Judy Holm, the site focuses on social and environmental issues that America faces. The site name was chosen specifically to be aligned to the Titanic. Just as it was the lookout's job to be on iceberg patrol, it is our job to be on watch for environmental issues. Just as the Titanic was viewed as "unsinkable," the planetary problems Earth faces are often, unwittingly seen as non-issues. We are not recognizing our own environmental, "sink-worthy," self-created "icebergs." Let's hope we do before it becomes too late, and let's hope we have enough lifeboats aboard if/when we get there!!  Again, case and point: The Titanic At 100 Years: We’re Still Ignoring Warnings, This Time It’s Climate Change, Says Director James Cameron.
So today, as we approach this monumental century-old anniversary, let's stop and think, and take the time to learn from our old mistakes.  Let's not go forth with a lack of lifeboats aboard the ship.  Let's plan ahead, and plan well...and make it to where there WON'T be a future environmental problem of Titanic proportions!!
Image:  from my camera and http://greenteamgazette.blogspot.com/2010/11/titanic-amount-of-frightening-plastic.html, Titanic Newspaper:  http://thinkprogress.org/climate/2012/04/13/463957/the-titanic-at-100-years-were-still-ignoring-warnings-this-time-its-climate-change-says-director-james-cameron/?mobile=nc
Posted by Vicki at 1:19 AM