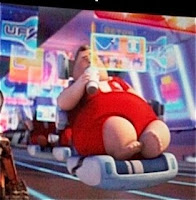 I completely feel like I'm on an endless expedition.
Not to mention, is it just me, or is it ironic that two 11-year old girls are the heart of a documentary called "What's on Your Plate"--a year's analysis of NYC's food system?  AND, they're essentially finding/drawing conclusions & attention to the same observations that Jamie Oliver is finding in Huntington, WV.  Plus, there's a USA first lady out there running a "Let's Move" campaign on obesity.
And then there's Oprah Winfrey & Ryan Seacrest.  On the March 26, 2010 episode of "Oprah," Ryan Seacrest was there talking about his new project, my favorite, "Jamie Oliver's Food Revolution."  Out of their conversation came the quote, "You have to believe in something greater than yourself, or you can never do anything greater than yourself."   As Ryan spoke out about being a little overweight at the age of 11 or so, he spoke strongly of Jamie Oliver's Mission.  Jamie too came on, speaking the same, even boldly stating that consistently feeding unhealthy food to children is akin to child abuse.  Jamie is hoping "to inspire American parents to have an opinion for themselves" and talking about how he hoped people would open their eyes and support both his and Michelle Obama's mission.
Here's the part of the program where I say environmentalism  (in every sense of the word) truly isn't about politics.  It doesn't matter if you are Republican or Democrat.  What matters is that we in America have a problem with obesity (among other things)...and it's starting younger and younger.  It's not just food, but inactivity, and the lifestyle we've developed here in America that's more "behind the screen [the TV, computer, PSP, etc]" than "out in the green." We can't argue this--it's out there in the CDC facts, these documentaries, these movements, and more.  Did anyone see "Wall-E?"  It was there, with the overweight humans riding their hovercrafts.
So it's "out there"....and maybe even closer to you in your home.  So what? And "now what?"  To take action or gain information, check out one of the following:
Image from http://3.bp.blogspot.com/_TUmrEJJqV_Q/SHbsPagxn6I/AAAAAAAAFYU/U3lCw5tnEnk/s320/Fat+Human.jpg
Posted by Vicki at 10:44 PM