Earth Day Is On Its Way: The Man, The Music

Here it is, a mellow Saturday night at my house after a very full family day of outings and adventures.  Kicking back, my husband landed on Maryland Public Television, and we found ourselves soaking in the tunes and philosophy of John Denver and his 1995 "The Wildlife Concert."  The concert benefited the Wildlife Conservation Society. Not only does music of my childhood come back to me with the familiar songs of John Denver, but it was inspiring to see one of the original environmentalist of the 1970s and beyond, speaking the same truths as environmental activists today.
Songs you might remember, that might make good background music for your Earth Day: 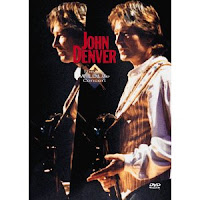 During the show, there were vignettes by John, and I found this one particularly telling:

"I think that I would most like to be remembered for the fact that I stood up for what I believe in.  That I spoke for it, that I sang for it, I worked for the things that I believe in in the world.... The question I'm most often asked about the environment is 'The problems are so big--what can I do?'  And I remind people that you don't have to do it all.  But there is something you can do.  It can be easy.  It doesn't have to be a great sacrifice.  As I say, if it comes out of your own heart and spirit and your own inclinations, it's the thing that is easy to do.  So you do the thing that you can do, that's an expression of who you are and an expression of your sense of relationship to nature, to the environment.  You do the thing that you can do--I'll do the thing that I can do. And we'll try to get these other people to do what they can do.  And we can save ourselves."

For the words of "The Earth Day Visualization" below, go to the "Living Lightly on the Land" section of Windstar Foundation, an organization co-founded by John Denver and Tom Crum, dedicated to the environment (at http://www.wstar.org/windstar/Education/LivingLightly/LivingLightly%20EarthDay2000.html). There is also a great photo collage remembrance to John Denver on their site at http://wstar.org/Connections/john.html 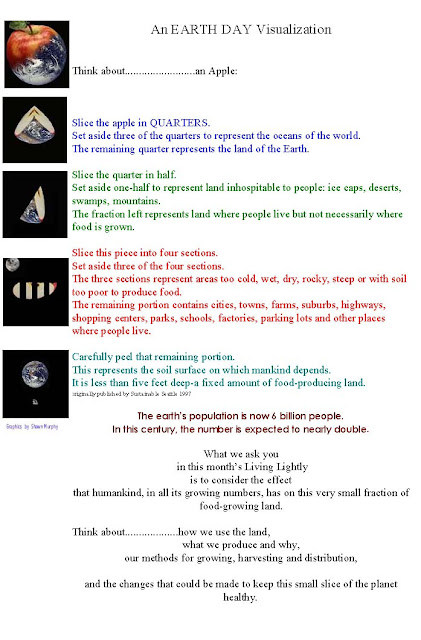