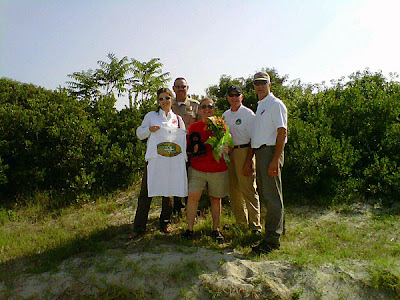 Ranked at 42nd "largest" state, Maryland hardly gets kudos for being big.  But no matter, 12,407 square miles is a lot of ground to cover.  Especially when you have mountains, a bay, and an Eastern & Western Shore.
Of the approximate 80 state parks of Maryland, 24 of them have set up "adventures" for you to "Quest"....those 24 being stretched from mountain to bay to Eastern to Western Shore...and everything in between.
Maryland's Park Quest 2010 is no new subject to Green Team Gazette, and neither is our pursuit of Baltimore Sun's Outdoor Writer Candy Thomson's "24/7 Quest" to do all 24 of the Park Quest state parks in a mere 7 days.  Today, her quest was met and won...as she writes about in her Baltimore Sun "Outdoors Girl" blog....complete with flowers and sparkling grape juice from the DNR staff who met her on her final stop at Assateague.  Major applause and admiration to Candy...you have our awe and our homage!  Being only 5 quests in ourselves, this was a supreme accomplishment!  Way to go Candy!
To find the picture above (akin to winning an Olympic gold medal in my book) and daily updates as to her adventures, visit Candy's blog by clicking the title above or go to http://weblogs.baltimoresun.com/sports/outdoors/blog/2010/07/park_quest_247_the_end.html
Posted by Vicki at 7:47 PM