A Message and a Bottle Sailing Into Shore! 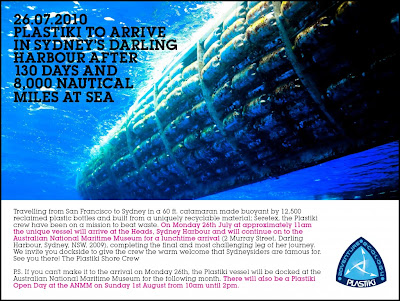 "Message in a Bottle".... Whether it is Plastiki's "motto," "slogan," or "battle cry," you decide. This phrase has been their catch phrase announcing when the crew finds cyberspace commentary highlighting their mission. It also has been their adage detailing their own mission. That mission? Single use plastics are a waste of resources and a polluting mess to our oceans, as the Great Pacific Garbage Patch will show.


David de Rothschild's bottle, with Adventure Ecology's message, is about to come to shore!!
March 20th, 2010 David de Rothschild & skipper Jo Royle, along with their crew, set sail in the Plastiki from San Francisco, California.  Now, just 4 months later they are on the cusp of landing on the shores of Sydney, Australia.   Not just any catamaran (which alone, crossing the Pacific would be intense), but one made of 12,500 plastic water bottles. Why? To highlight the importance of reusing (rather than having to generate new) materials and to discover the sea of plastic slop that's out in our oceans. 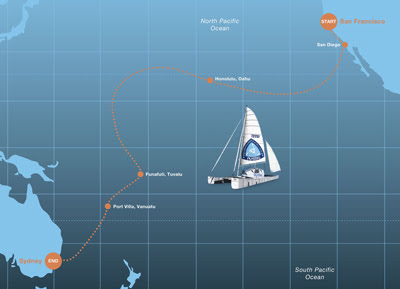 All systems are a-go for the Plastiki to land in Sydney "tomorrow" (but we're talking time zones and different continents here, people!).  Actually, upon checking twitter updates, it seems that late night Sunday USA could very well be Australia's tomorrow!  Case and point:

The Plastiki is coming through the Heads and in into the Harbor right now, such a beautiful sight!!   37 minutes ago via web

the Plastiki is so close! About 4 nautical miles from the Heads, the gateway to Sydney Harbor. Wahoooooooo! 26 minutes ago via web

The Plastiki is sailing through Sydney Harbor!! Such an awesome sight! Helicopters over head & a very excited crew http://twitpic.com/28p2dm    3 minutes ago via web

Being a person who has tracked the Plastiki along the journey and even before, it seems fitting to sort of watch it as it happens, here and now, from afar...I'm excited about the "message in a bottle" that Plastiki is sharing....From the United Nations' Environmental Program & their July 23rd interview with David de Rothschild: (http://www.unep.org/Documents.Multilingual/Default.asp?DocumentID=630&ArticleID=6657&l=en&t=long)

" 'This is truly a message on a bottle', said Mr. de Rothschild. 'We have this addiction to single-use, throwaway plastic, which is choking up the ecosystem. With Plastiki, we want to enlighten, inform and inspire people and show that there are solutions here and not just problems.'.... Mr. de Rothschild also raised concern at the scarcity of marine life his crew had observed on their journey across the Pacific. 'We've spent four months at sea but have seen very little fish stock and only a handful of marine mammals', said Mr. de Rothschild. 'That is a real sign that the oceans are in desperate need of our help.'....

At the end of the live link-up with UNEP, Mr. de Rothschild said Plastiki's next challenge was to encourage others to use plastics more responsibly. Once the boat is back on dry land, Plastiki will become a travelling exhibition raising awareness on waste plastic and marine pollution.   'After this adventure, Plastiki's second chapter is a chapter of change', said Mr. de Rothschild. 'The message we're sending out is 'What is your Plastiki- What can you do to change the world?' "

Kudos Plastiki....G'day & Grand job!!  We're definitely tipping our hats off to you for an amazing feat!!
To get a closer look at the poster above, or to read the Plastiki's blog article about their nearing arrival, click the title above, or go to http://www.theplastiki.com/2010/07/the-plastiki-on-track-to-sydney/

Map image of the voyage from http://www.thetimetv.com/news-iwc-schaffhausen-supports-the-plastiki-expedition-the-official-partner-david-rothschild-and-his-organisation-adventure-ecology-803-62
Posted by Vicki at 9:40 PM

I know that it's not always easy being green, but I'm pretty relentless in my pursuit! A lot of times, going EdTech will get you there! Just don't forget to go outside!!

All posts and commentary are my own and not necessarily those of any organization I am affiliated.