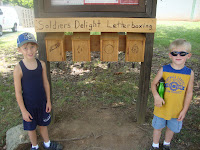 A Sunday afternoon, a Park Quest Passport in hand, and Team Dabrowka is on the move.  A trek to Owings Mills, MD gets us to Maryland's Soldier's Delight State Park.  With numerous reason's out there WHY it's named this, the jury's not quite certain.  But it certainly was delightful!
We've learned here on our 6th Park Quest that if we have a shortened version/option, it's best we go that route--4 year olds can be rather vocal on the longer quests.  So can 8 year olds.  Especially when mid-day heat and humidity are at play.  But this Quest had a bundle of fun, both outdoors and indoors:  a letterboxing element with some detective work needed to unlock the treasure box, a scavenger hunt, and even a visit with a screech owl at the Scales and Tales program the nature center offers.  We learned on the "Owl-ometer" that barred owls are the most mellow (and saw 2 darling ones) and that Great Horned Owls are "the most tenatious"...and that screech owls (which look a little baby-Great-Horned-Owl-esque) are somewhere in the middle. 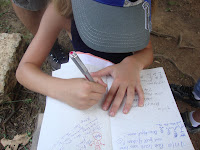 Being someone who has never Letterboxed, it was a pretty cool phenomenon.  According to http://www.letterboxing.org/faq/faq.html#001 (where you'll find all the North American letterboxiing hotspots), letterboxing mixes "treasure hunting, art, navigation, and exploring interesting, scenic, and sometimes remote places."  Hidden somewhere "out there" is a weatherproof box with a logbook, rubber stamp, and perhaps even other treats for the finder.  After following clues or the map and applying keen detective skills, the searcher hopes to find the hidden treasure.  Once found, the clues unlock the box, where notes can be left in the logbook for future finders.  Takes you back to the time of treasure maps!  And with kids, that idea of being a modern-day pirate is golden! 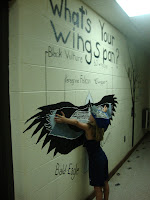 Inside the nature center on the scavenger hunt side of things, my reptile-lovin' kids loved the painted, box, and red-eared slider turtles that they saw.  They were going left, right and then some on the scavenger hunt within their 3-roomed nature center with AMAZING painted walls (which have only been here since early this spring).  It really captured my Dabrowka Duo's interest for two solid hours!!  Job well done, Soldier's Delight & Maryland's Department of Natural Resources!!
For my local friends and followers, click on the title above or go to http://www.dnr.maryland.gov/parkquest/soldiersdelight.asp to take advantage of some Maryland letterboxing at Soldier's Delight.  Friends afar, go to http://www.letterboxing.org/index.php or http://www.atlasquest.com/ to see if you can locate some letterboxing locales near you.