One Year: Through The Eyes of a Quarantine 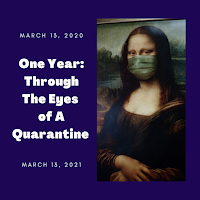 As we hit the one year anniversary of when many schools and communities in the United States went on shutdown March 13th, 2020 due to the novel coronavirus, the phrase "through the eyes of a quarantine" came to mind. This led near-instantly to Lin Manuel Miranda's song from Hamilton coming to mind:  "Through the Eyes of a Hurricane." I played around with modifying it:
In the eyes of a quarantine
We are homebound.
While the virus swirls,
A pandemic.
March 13 of '20, a quarantine
Locked us all down
In every town.
Near nation-wide, a long year now.
That's about as far as I got.
A year ago, I didn't have an inkling that we'd be here, in this way, an entire year from then. Silly us, as we prepped through the end of February and the start of March for the potential for remote learning, none of us thought it'd be more than a few weeks or a month at most. When glimmers of conversation cropped up in the news it could be until 2021, I found it unbelievable and despairing.
And here we are now. A year later.
Some schools and children have been on remote learning for an entire year, or darn near close.
Last spring, I wrestled with remote learning. Then I learned this fall that hybrid learning and teaching to half the class in the classroom and the other half simultaneously via zoom is actually harder. Last April, who would have thought those words would be coming out of my mouth! As teachers and students alike, we have worn our masks--or 2 simultaneously--all day long every day since August. Essential workers in our own classrooms. 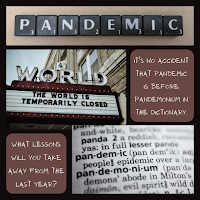 Whether remote or hybrid (or perhaps some schools even full back in--ours is going that route after our Spring Break), we've become worn out. We've watched numbers spike and dip down then spike up again. We've started seeing variants make their way like a wave across the planet. We've missed out on a lot of golden moments and memories and milestones. It's been a really long time since I've seen my mom outside of a computer screen. In fact, all of 2020 and then some.
And we've also been frustrated as we see people we know (either in our paths or on social media), doing their own things, taking trips or having parties, making us feel like some of us are working so hard to do the right thing, while others gallivant and "live life because its meant to be lived," yet in the middle of a pandemic, it doesn't feel right or just. This leaves some of us "pangry" [pandemic angry--yes, it's a thing], and that too has an exhaustion associated with it. Especially as variants crop up and we feel the never-ending-ness of this pandemic.
But...we've seen the glimmer of hope too. For some, that comes with a new president. For even more, it's associated with the virtual "light at the end of the tunnel" with vaccines and the science and money backing them. More hope coming forth too as more and more of those vaccine make their way into arms. As a teacher, I'm thankful to be bumped up on that list with both vaccines behind me--and in me.
I ran across an article entitled "What the Quarantine Can Teach Us about Zero-Waste Living, Saving the Planet, and Hope" by Sophie Hirsh on GreenMatters.com with the environmental sites I follow. A Google search will lead you to a bounty of similarly themed articles about what we can learn from this time. The eco-tie-ins are many:
During the pandemic, we've eaten at home more--meaning real food, healthier options, and reasonable portion sizes (versus the super-size portions of many restaurants, which then leads to waste or even obesity). We've learned to make do with what's at home because a trip to the grocery store can feel cumbersome with masks or the need to order online. The same is true as we've been less likely to go out shopping and coming home with things we don't need. Inadvertently, many of us have lived a more minimalistic lifestyle. We've seen we can get away with less... and it also has created innovative work environments, making us rethink work and school. We've also seen evidence in the early days of the planet restoring itself with cleaner air and animals reclaiming some urban areas which encroached on their natural habitats. Despite it being a drastic measure, clearly, it's doable. And we are starting to see some of those eco-initiatives come through in Biden's presidency. 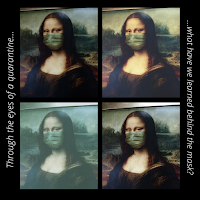 I purposely chose the masked Mona Lisa in my opening art because it feels symbolic of the year. Part of the allure of Leonardo da Vinci's famous work is the mystery of Mona Lisa's smile. Eyes and smiles go together. Part of the intrigue over the Mona Lisa painting is in her eyes, which seem to follow you. It has a name: the Mona Lisa effect.
Over the last year, especially teaching in a mask (and seeing the daily Zoom thumbnail of myself), it's true that you definitely can have smiling eyes. But, the true connection in the smile is the part that's now-been-hidden behind the mask for a year now. Paralleling a lot of human connection that has been missing in our adapted lives this past year.
As more and more people get vaccinated, we are able to come a little bit more out of our hidey-holes. We can start to re-gather together into shared living space as Spring starts to flower and warm. May we carry forth some of the importance lessons we've collectively learned. May we really be able to "see".... and may we smile and embrace joy, despite the loss of a hard year.
Art created at canva.com; Mona Lisa masked pic in stock art on canva.com; 3 pandemic pictures from the following: https://www.weareiowa.com/article/news/nation-world/merriam-webster-top-word-of-2020/507-451a352e-c31c-402f-85ee-8938bf785861, https://www.thejakartapost.com/life/2020/12/01/pandemic-chosen-as-word-of-the-year.html, and https://leslieannetarabella.com/2020/12/nothing-good-about-2020.html/
Posted by Vicki at 1:30 AM