Eunice Foote: Foot at the Front Door of Climate Change

Closing the door here on Women's History Month as we make our way to April, we're going to take a sneak peak at Eunice Foote, one of the first to actually have her foot in the door and finger on the pulse of climate change.

Eunice is a little known female environmentalist and women's rights activist, however surprisingly, she was one of the first to introduce the idea of global warming and climate change.

Born 202 years ago in 1819, Eunice Newton Foote (of Seneca Falls, New York) was a physicist, inventor, and women's rights advocate. Through experimentation over time, Eunice studied the sun's rays effects on different gases using an air pump, glass cylinders, and thermometers. From there, she wrote up her findings in a paper in 1856 entitled Circumstances Affecting the Heat of the Sun's Rays. It was presented at the American Association for the Advancement of Science's annual meeting by male scientist Joseph Henry rather than by Eunice Foote herself. The reason for this is not clear given she presented a different paper of her own the following year. 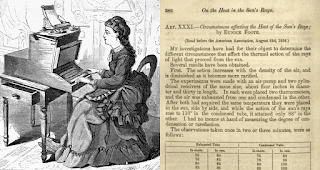 However, it was Irish physicist John Tyndall who is often credited for the discovery of the greenhouse effect (which is the foundation of global warming and climate change) in 1859--three years after Eunice's paper!
What is likely is that Eunice's work was probably unknown by Tyndall, due probably to the fact that women of that era were not revered in the science fields. Secondarily, the primary folks in the field at that time were Europeans, not Americans. Thirdly, Eunice held the status of amateur scientist, making it yet another reason why her name did not circle in all the right places. Additionally she did have some flaws in her study, yet despite that, she was the first to make the full connection. Given that recognition is due where it is due, Eunice was noted (posthumously)  to be the first to notice carbon dioxide and water vapor absorbed heat--linking to how our atmosphere would lead warming the planet with increased carbon dioxide.

To learn more and further tip your hat to Eunice Foot as the "Mother of Climate Change," read these articles and watch either of the animated video or short film below: