The Pursuit of the Great Outdoors, Part 1 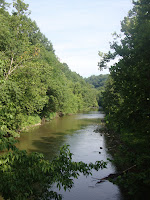 As anyone knows who has paying attention, I've been writing a lot this summer about outdoor adventures and Maryland Park Quests.  Also, if you've really been paying attention, you know that the underlying tie-in relates to the principles of the "No Child Left Inside" Act, "nature deficit disorder," and Richard Louv's book "Last Child in the Woods.
But no worries if you haven't.  You can learn more about "No Child Left Inside" by clicking the title above or go to http://www.cbf.org/Page.aspx?pid=895).  There you will find the following quote in reference to Richard Louv:

"Louv links the lack of nature to some of the most disturbing childhood trends, such as the rises in obesity, attention disorders, and depression.....The "No Child Left Inside Act" would address this by igniting students’ interest in the outdoors and spurring them to take part in outside activities. And learning to explore the natural world and their personal connection to it, inevitably triggers an interest in spending more time in it."

Perhaps my somewhat obsessive interest in this subject this summer is related to the busy worker-bee teacher that I am, that doesn't get "out and about" nearly as often as I should during the school year.  Perhaps it comes from teaching 18 years, having known 1-dimensional "totally tech-y" kids who can't live life unplugged--and seeing my own children fall victim to the gravitational pull of the DS, computer, Playstation, Wii, and the TV.  (But don't you worry, I do my own "tug-of-war" to pull them back!!)  Perhaps it's my dismay at seeing the rates of  obesity in America on the rise (and my own summer fight to shed a bonus 10-15 lbs).  Perhaps too it's a disgust upon reading books such as Annie Leonard's "The Story of Stuff," and seeing that the accumulation of this stuff isn't leading anyone anywhere closer to happiness or healthier approaches.
The connections nation-wide--world wide--abound.  It's in the over-plasticized & polluted oceans that David de Rothschild was highlighting with his 4 month Pacific Ocean voyage on the Plastiki.  It's out in the oil-spilled/filled Gulf of Mexico that is contributing to our petroleum-based, over-consumed, disposable society (especially where the plastic-glutted, "Happy Meal"-treasure-filled toy box is concerned).  It is in the factors such as this which, in turn, lead to maxed-out credit cards, debt, and unhealthy lifestyles.  It's only a short commute from there to the diets filled with far too many calories that are served up in Styrofoam containers and single-use plastics, and eaten in front of the television. 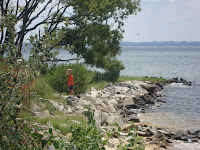 Maryland's Park Quest for me has been an opportunity to take time to stop and smell the roses, and to experience new venues. It's had me moving at a different pace (whether that be hiking, paddling, or biking).  It has also had me viewing the world differently, and it has worked as a springboard for different types of activities I could include as a teacher to help diminish "nature deficit disorder"...for instance setting up a letterboxing situation on our school campus and incorporating curriculum quests that I could take outdoors just simply to change things up. It has us doing exactly what Michelle Obama is trying to get everyone to with her "Let's Move" campaign to fight childhood obesity (http://www.letsmove.gov/).
Hopefully it's helped you, reader friend, get outside and get moving in a similar sort of way.  The roses and adventures await!
Pictures from my own outdoor adventures.
Posted by Vicki at 10:46 AM