Food For Thought, The Return Trip 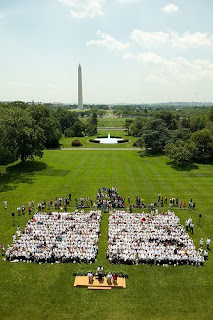 June 4th, 2010 just as schools were getting ready to get out, First Lady Michelle Obama called together a battalion of chefs to get them on board her "Let's Move!" campaign to fight for healthier food in schools and to work to lower childhood obesity.  Anyone can notice through a simple walk through Wal-mart or a nearby amusement park that obesity is on the rise, both for young and old.
Michelle Obama has made "Let's Move!" a very personal project (http://www.letsmove.gov/).  So too has Chef Ann Cooper, who perhaps was at the June 4th White House event.  After reading "Lunch Lessons: Changing the Way We Feed Our Children" by Ann Cooper and Lisa M. Holmes, I see Ann Cooper as the American version of the United Kingdom's Jamie Oliver (of ABC TV's "Jamie Oliver's Food Revolution").
Starting her own revolution,  Chef Ann has made it her personal mission to advocate for children and to turn the lunchrooms into "culinary classrooms." On her website (http://www.chefann.com/), you can sign up for her newsletter as well as get ideas how to "up" the bar on your own school cafeteria's healthy-factor. Included in the links and resources, she also has past menus from different schools she's been involved with transforming.  If you're looking for some solid information and a load of healthy lunchtime recipes, this books is one to read

If you are wanting to do a little more than merely reading a book and changing your eating habits, here's your chance to do something. Let's Move! has teamed up with GOOD (a worldwide network of "individuals, businesses, and nonprofits pushing the world forward." as quoted from http://www.good.is/pages/whatIsGood).  Through this teaming, there's a nationwide contest inviting people around the country to design an "infographic" poster to help raise awareness on the issue of childhood obesity.  By creating a visually-informative poster such as this, Let's Move! and GOOD are looking for someone to encapsulate not only the state of over-eating in America, but also what we can do as parents, educators, and tax payers to promote a solution to this epidemic.
For more information about this infographic contest, which ends July 6th, 2010, go to http://www.whitehouse.gov/blog/2010/06/25/create-infographic-about-childhood-obesity-epidemic or http://www.good.is/post/project-create-an-infographic-about-childhood-obesity .  Winners will be announced July 20th, and will be showcased at both http://www.good.is/, www.LetsMove.gov, and the White House blog at http://www.whitehouse.gov/blog

Whether you get to work creating your infographic or not, it's all definitely good "food for thought!"
Photo from First Lady Michelle Obama's June 2010 Facebook photo album with this caption: "First Lady Michelle Obama addresses hundreds of chefs from around the country during a “Let’s Move!” event on the South Lawn of the White House, June 4, 2010. The First Lady called on chefs to get involved by adopting a school and working with teachers, parents, school nutritionists and administrators to help educate kids about food and nutrition." ~Official White House Photo by Chuck Kennedy
Posted by Vicki at 4:18 PM