The conversation with my 3rd graders in the Maker Lab started like this:  "We've been experimenting with LittleBits for 2 weeks now.  I want you to envision the creator of these. What kind of person do you imagine?"

Answers for both classes were similar:

Then a couple-minutes later into the list, there were these comments: 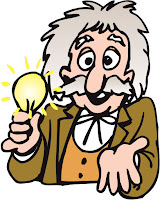 But overwhelmingly, the answers fit the elderly male, professorial avatar, and that is the image most students raised their hands to when placing their final vote of prediction. (Side note: both classes were heavier hit in the female student department.)

Here is the inventor of LittleBits,
during a 2012 TED Talk:

The conversation with my students, both at the front end (and then the reflection end) was equally rich for both classes. While it was a clear indication that we were all surprised by their first-instinct comparison as related to our predictions versus reality, there ultimately was really no surprise here at all. Girls could do this stuff too Women most certainly could be inventors, scientists, technology leaders, circuitry masters, engineers, and LittleBit Creators. All 4/5 of those STEM/STEAM letters are represented: Science, Technology, Engineering, (Art), Mathematics!

I personally found it startling the default to the male-mental-avatar, here in 2017.

During my mid-March Spring Break, my family and I were meandering around DC's Smithsonian's American History museum. (There, they had a fabulous exhibit on Places of Invention.) In the gift shop, I found two dynamic books from the "Girls in Science" series on this very subject for young upper elementary/middle school students (perfectly timed for the age of girls who tend to step away from science and math):

One of my favorite parts in these approximately 100 page books are the embedded QR codes (tied with photos & info boxes) that link you to places to pursue more research on the historic characters and concepts of the books.

Other books in this dynamic series:

For more books about smart, sassy, scientific women, check out "Ignite Her Curiosity: 25 Books Starring Science-Loving Mighty Girls." (I am currently reading the sequel to "Calpurnia Tate," as we speak.)

As educators, I think the timing is ripe to dive in and engage girls to the bounty that is ahead in the STEM & STEAM studies ahead!