The Noise of the New Normal

It's been a noisy week: 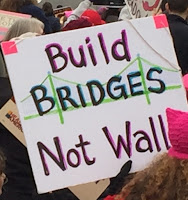 An inauguration (with debatable numbers of attendance and a newly invented term: "alternative facts." Thank you Kellyann Conway!")


A Women's March in DC and 600 or so other ones, big and small. I was there in DC. There was a lot of noise & positive energy! I think my favorite speech over all I'd seen (which was all online & nothing at the march as I was midst the throngs of people in the mall) was Kerry Washington in LA. Everyone should listen to it: men, women, republican, democratic.

The news was no quieter as Trump began changing up the White House website, writing proclamations and doctrines, declaring days of patriotic devotion, and starting to put things in motion.

But the roar continued on, leading to the noise of the National Parks, scientists, and my comedic favorite: the @AltNatParkSer Twitter and Facebook account, where facts are posted and can be found by rogue National Park Service employees after hours. (I shake my head--since when is science debatable or censored?!)

We've had a Trump and Pence supported March for Life (as opposed to last Saturday's Women's March--at least by tale of Trump's Twitter feed). State department top employees were unilaterally fired, losing a base of collective knowledge. And, Friday, on Holocaust Remembrance Day, Trump issued a refugee ban to some countries but not others (where he interestingly has holdings), and Christians will be the first to be allowed in. 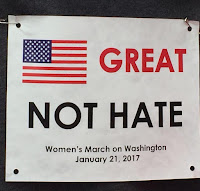 Due to the growing rumble & grumble, some future proposed marches which seem to be growing in number by day:
As if that's not enough noise....the biggest noise too comes from social media. A lot of "us, "them," & "gee, can't we all just be friends."

It's a highly turbulent time. Certainly the most in my children's life time, and perhaps one of the most in mine.

The silver lining is that perhaps it will galvanize people, calling us all out of our li'l cocoons and into an activist world. Perhaps this is our time to "break out and butterfly." Come out of the comfort, metamorphosize, and emerge stronger, more capable, greater than ever before. Maybe through the anger and the action, and in fighting for our beliefs that might be marginalized by this administration, we will indeed make America great again. Not in Trump's ways (which feel akin to the isolationism of "The Dark Side"), but through unity, compassion, understanding empathy, love, and light.

This week in my house, I found my daughter chanting in her own call and response (like most people hum a jolly li'l tune) the words from last Saturday:

It's contagious and it's true.

This IS what democracy looks like. Sometimes messy and twisty-turned, difficult even dangerous, like a cacophony of noise....but worth working for.