Cheers to one of my new favorite teaching resources--the Earth Heroes series (pictured above).  Each book is a collection of biographies that features 8 "champions" in that field.  Environmental powerhouses such as John Muir, Henry David Thoreau, Jane Goodall, President Jacques Cousteau and many many more make up the list of key eco-players.
About a week ago, each of my 3rd graders in my class picked an environmentalist.  In picking "their person," they got a 10-page chapter from one of

the above books:  Earth Heroes: Champions of the Wilderness

, Earth Heroes: Champions of Wild Animals, and Earth Heroes: Champions of the Ocean.  After reading and researching, highlighting and note-writing on their brainstorm web, they each wrote a 2-4 page cursive-written, impressive composition...each one starting "[My Person] was [is] an Earth Hero."
Let me tell you, they blew me away!  Very impressive compositions for 8 & 9 year olds, if I do say so myself (and being a 3rd grade teacher for the past 9 years, I've read a 3rd grade essay or two!).  If you're in the classroom and looking to do a unit on biographies, this is the way to go!  Added to that, they created a visual image on a body cut-out...see my "Wall o'Fame" and some of their written highlights here below! 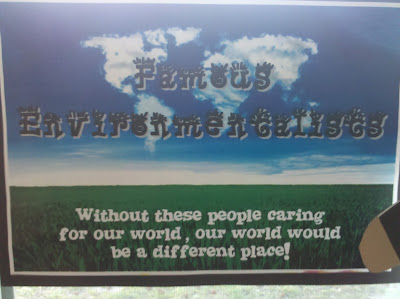 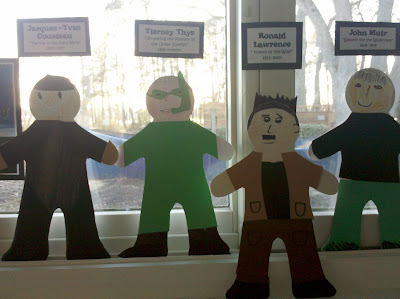 Jacques-Yves Cousteau:  "He is a famous oceanographer....He influenced John F. Kennedy. ...My Earth Hero is important in many ways."
Tierney Thys:  "She is a famous oceanographer who studies ocean sunfish....She helped save them and has studied them for more than a decade."
Ronald Lawrence:  "He studied wolves a lot when he had time....The Canadian Wolf Center in Canada wouldn't be here if it wasn't for Ron....He was a friend to all animals."
John Muir:  "John Muir was the president of the Sierra Club...He was an inventor, writer, farmer, lecturer, and a glaciologist.....John was a "green" person and a person who really helped to take care of the Earth." 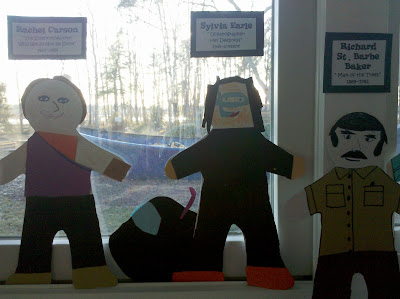 Rachel Carson:   "Rachel saved eagles, falcons, and other birds by telling the world of the dangers of DDT....Rachel inspired the beginning of the EPA. ...These are only a few of the reasons why Rachel Carson is an amazing person."
Sylvia Earle:  "She is an important woman in history.....She was named a 'living legend'...She has had a lot of ocean accomplishments and is a very interesting person."
Richard St. Barbe Baker:  "Richard was known as the 'Man of the Trees.'...He helped save twelve thousand acres of redwood trees....He was a famous environmentalist." 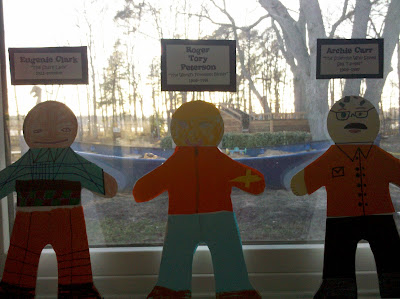 Eugenie Clark:  "I admire this person because she worked hard to share information about sharks.  Eugenie Clark is sometimes called the 'Shark Lady' because of all of her hard work."
Roger Tory Peterson:  "Some of his accomplishments were that he wrote and edited over 50 bird guides.  ....Richard created the "Peterson System" of identification for field guides....He is interesting, and with him, people wouldn't know as much about birds."
Archie Carr:  "One of his great achievements was that he told people on Earth that over-fishing and collecting the eggs of sea turtles damaged the population....He published 10 books and more than 120 scientific articles.  He also did research that helped protect sea turtles."
To find these award-winning, children's non-fiction books that have a way of drawing your student readers in with their engaging text, "Fast Facts" and personal timelines, click the pictures or links above, or go to either www.amazon.com or  http://www.naturebooksforkids.com/.  You know when the 8-9 year olds are pouring over the books and timelines and can't seem to get enough of them, that you have a thing of gold in your hands!  A written wealth indeed!!
Posted by Vicki at 8:50 PM