"But love of the wilderness is more than a hunger for what is always beyond reach; it is also an expression of loyalty to the earth which bore us and sustains us, the only home we shall ever know, the only paradise we ever need - if only we had eyes to see." ~ Edward Abbey

I don't know much about Edward Abbey, other than he sometimes went by "Cactus Ed" and he was sometimes called the "Thoreau of the American West."  An internet search also brings up he could fondly be called a "conservative anarchist" and an "eco-terrorist."
But, in a good way, of course!


I guess you could say that as a writer of an environmental blog, I could be considered anything from an eco-warrior to an eco-nazi.  No, not officially "the green police"  (though I do love that Superbowl 2010 Audi commercial!), but I have been known to give the occasional "compost infraction" (especially in my "green school" classroom where we do compost.)
So I'm sure you're probably wondering...where the heck did Edward Abbey enter in to my radar? 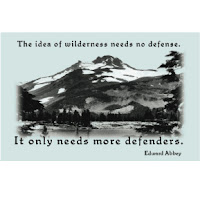 A friend of mine sent me a quote from Edward Abbey, in honor of both our school spring break and my crazy past-time of hunting for resources that are simultaneously ecological and educational.  It's an odd hobby, true, but someone's got to do it, right?!  Truly, as I find all-things-"green" out there, I keep getting struck by how much is out there that sooo many don't know but yet it's sooo important to know!

So, in this season o'spring break, this quote is not only timely, but true.  May you take it as much to heart as I do!

"One final paragraph of advice: do not burn yourselves out. Be as I am — a reluctant enthusiast... a part-time crusader, a half-hearted fanatic. Save the other half of yourselves and your lives for pleasure and adventure. It is not enough to fight for the land; it is even more important to enjoy it. While you can. While it’s still here. So get out there and hunt and fish and mess around with your friends, ramble out yonder and explore the forests, climb the mountains, bag the peaks, run the rivers, breathe deep of that yet sweet and lucid air, sit quietly for a while and contemplate the precious stillness, the lovely, mysterious, and awesome space. Enjoy yourselves, keep your brain in your head and your head firmly attached to the body, the body active and alive, and I promise you this much; I promise you this one sweet victory over our enemies, over those desk-bound men and women with their hearts in a safe deposit box, and their eyes hypnotized by desk calculators. I promise you this; You will outlive them."  ~ Edward Abbey

To learn more about "Cactus Ed," go to http://www.abbeyweb.net/

And, because I couldn't help but include it....the 2010 Audi Commercial:
Edward Abbey Photo from http://jameslogancourier.org/index.php?itemid=440%20
Mountain/Abbey Quote picture from http://www.northernsun.com/n/s/Defenders-Edward-Abbey-Poster-(4448).html
Posted by Vicki at 11:52 AM