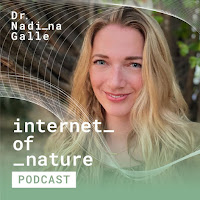 Podcasts are what's playing in my car if I'm on any kind of drive-around-time. It's not surprising that I gravitate to a lot of subjects that intersect here, with GTG.
A rather new-to-me podcast I landed on is called The Internet of Nature. The podcast, created by Netherland-born and Canadian-raised ecological engineer Dr. Nadina Galle, has this overview:

"Can nature and technology—long viewed as opposing forces—work together to stabilize our climate, sustain our urban environments, and benefit our health? Dr. Nadina Galle is an ecological engineer on a mission to find out. Join her every Wednesday as she interviews top CEOs & innovators on their technologies for building greener, healthier, and smarter communities. Each episode contains powerful stories behind the entrepreneur, delves into questions usually shied away from, and explores where the internet and nature converge."

It's definitely a philosophy that strikes close to my heart too. I've long-thought (and often circle-back to) the idea that technology is the innovative solution to our environmental challenges!

Nadine Galle's Season 4 Episode 10 of The Internet of Nature is called "The More High-Tech Our Lives Become, The More Nature We Need with Richard Louv of the Children and Nature Network." There is A LOT packed into that title alone! One of the biggest parts is the episode's guest: Richard Louv. Author of ten books, Richard Louv's most notable one (which he mentions in the podcast led to his calling) is his book Last Child in the Woods: Saving our Children from Nature Deficit Disorder. Originally published in 2005, Last Child is where he introduced the concept of "nature deficit disorder." He was one of the first to pull together scientific research on the benefit of nature on our health and well-being. Richard Louv also is one of the co-founders of the Children and Nature Network, a website created in 2006 as a way to reconnect people with nature. The resources on their website alone could have me reading for days, reminding me to get outside 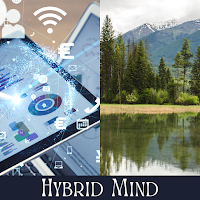 It's no surprise that nature deficit disorder was a large part of the podcast discussion between Richard and Nadina in this episode. Despite his book being 17 years old, we need nature more than ever. Richard discussed the idea of "hybrid mind." While he is often times called "anti-tech," he truly is not--he sees the need and advancements that tech brings. But as with everything, it should be one of those "all things in moderation" issues. Along with the benefits of tech... there is a point of oversaturation. We need to counter it. Nature is that perfect foil. Hence the hybrid mind: the more we are connected to tech, the more important and vital nature is for us! Naturally (pun intended), the more "tech-i-fied" we become, the more we need to be outside.
If we learned anything with how Covid impacted us in 2020, we certainly learned that we are tech-centric bodies in motion. Sometimes, too much so. Zoom school helped us continue learning, yet it was not ideal nor as impactful as in-person educations. Boundaries and borderlines overlap between home and work. 24-7 news, emails, texts, notifications....it is too much. It gives the illusion of being constantly available while we're constantly connected... and often bosses and businesses take advantage of that. It definitely creates a digital anxiety in the stress of all this wired-connection without enough human or environmental connection.

We are collectively getting fried, and we need nature to help rescue our hybrid minds.

Along those lines, Nadina and Richard's conversation turned slightly to politics... but only in the sense that "politics should keep its hands off nature." So many issues in the world have been made binary in an "us-them,""good-bad," "blue-red" mentality. When did being stewards of the environment become partisan... and more importantly, why?! One's love for nature should not be at all associated along political party lines. We ALL share the planet. We ALL need nature. Whether we all know it or not!!!

Clearly, the podcast interview gave me a lot of food for thought and has stayed with me for awhile. I definitely recommend taking a little time out to go have a sit and listen. Whether it's in your car, or out in nature!
Podcast cover image from https://open.spotify.com/show/3h08dRknSkAXNWwtxSSuMI, Hybrid Mind image created using canva.com
Posted by Vicki at 1:30 AM