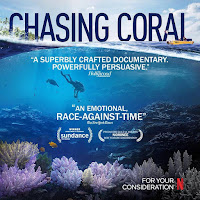 As part of my son's summer homework for his AP Environmental Science class, he had to watch at least one of a selection of nature documentaries. One of the films was Chasing Coral, produced and directed byJeff Orlowski.
Knowing his mom is an eco-warrior, my son asked me if I wanted to watch it with him. Of course, that was an offer I couldn't refuse. We had just come back from a vacation in Puerto Vallarta where we had a lot of opportunities to snorkel. While we didn't see a lot of coral on those encounters, it did hit home in a harder way than usual.
With my son's permission, he's the guest writer on the following post, his summary on the film.
Coral reefs are the rainforest of the sub-nautical ecosystem. These beautiful regions of aquatic space give way to a flurry of marine life and wonder. The documentary Chasing Coral, which was released in 2017, is based around said natural wonders and how we as a species are driving the world’s coral to extinction. When Chasing Coral starts, you are met by Richard Vevers who introduces the viewers to breathtaking reefs and the first sights of coral bleaching. The viewers are then told about the biology of the coral and sadly how (due to human interference) the coral is starting to bleach and die. After a lesson on how coral affects the oceans, we are led into the mission which Vevers and his team are dead-set on pursuing. This mission includes installing cameras in places where they can videotape coral. In doing so the crew hopes to collect time-lapsed footage of coral bleaching. After some trial and error as well as some hardships, the team eventually gains these videos and spreads them to the world.
Over the course of the documentary, the viewers are keyed into many different aspects of the coral species and how they affect the world around them. It would be trivial to watch this documentary and not mention how extreme coral bleaching is being stressed. Coral bleaching occurs when the water temperature rises 2 degrees above the water's average. Bleaching is a stress response, almost like a fever in humans, that causes the coral to purge itself of the phytoplankton living in the coral. This will most likely result in its death. A fact that shook me to the core is that 50% of the Earth's coral had died in the thirty years before this documentary was released. The fact that hit me hardest though was how we are living in the era where we could see the last coral reef bleach. If we don’t act, it will. Chasing Coral puts into words just how close we are to the collapse of our maritime ecosystem. I believe Chasing Coral pushes the depressing and cautionary message that if we let this ecosystem fall, so too will the remaining terrestrial ecosystems. This will, in turn, lead to the downfall of Earth.

The producers of Chasing Coral all believe that the world is in desperate need of reefs which in turn means they have a shared bias; but, that does not mean that the message they push is flawed. The only other perspective that could be offered is one of indifference to the life of the ocean, and that in my opinion is immoral. As a person raised in science and who has gone to “green schools” his whole life, this documentary hit me hard. My whole life has been entangled with animals and for something as pivotal as coral to be going extinct sends a wave of apathy down my spine. Although the documentary saddened me to watch, I highly recommend it. This documentary should be watched by everyone because as a species we have to come together and look at the science in order to create a world where life can thrive. Earth is the only planet we know with life. As the dominant species, it is our duty to bring security to said life, from the terrestrial to the sub-nautical.
To learn more about this film, check out the Chasing Coral website. They have a "For Schools" tab with additional resources such as lesson plans, short clips, a 6 minute virtual reality opportunity, and an Ocean Portal for school. They also have a "Taking Action" tab with several ideas if you feel like you need to do more.
You can watch it in it's entirety on Netflix or on their YouTube channel.
Video from https://youtu.be/b6fHA9R2cKI, Image from https://www.facebook.com/chasingcoral/photos/a.1615646605406137/1775349332769196/
Posted by Vicki at 1:30 AM