Those Chasing Arrows On Plastic Items 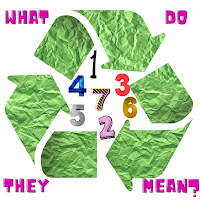 I remember being a newbie to the world of recycling and environmentalism. Seeing those chasing arrows recycling symbols with the numbers in the middles led me to believe all those things that these symbols are on were recyclable.
Turns out they're not, and I learned that early in my environmental pursuit.
Not all plastics are created equally...nor do they all recycle easily (and some, at all.) Plastics fall in the following categories, and usually the number inside those chasing arrows has a lot of meaning (as the infographic below shows):
♻️1-- polyethylene terephthalate (PETE)
♻️2 -- high-density polyethylene (HDPE)
♻️3 -- polyvinyl chloride (PVC)
♻️4 -- low-density polyethylene (LDPE)
♻️5 -- polypropylene (PP)
♻️6 -- polystyrene (PS) [What I like to refer as "evil styrofoam."]
♻️7 -- other (which can include polycarbonate resins, acrylic, polyactic fibers, nylon, fiberglass, etc.) 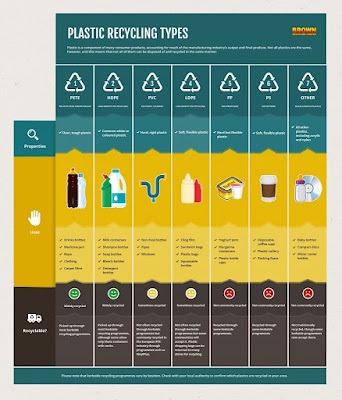 The ♻️1 and ♻️2 are more widely recyclable....after that it has always gotten fuzzy when it comes to recycling. [Another good infographic on this is here.]
At one point here in my local municipality, they were keen on you erring on the side of overly optimistic. If you weren't sure, put it in and they'd decide. They must have had a bad case of "be careful what you ask for," because they've since changed their tune and that went away.
It's all so freaking confusing. Some could even argue misleading!
Well...that may change. I ran across the following article on Grist.org entitled "California Wants to Ban Misleading Recycling Labels. Plastic Companies Don’t." California Senate Bill 343 passed the CA State Assembly September 8, 2021 and the State Senate on September 9, 2021 and was enrolled and presented to CA Governor Gavin Newsom on September 17th. This Bill bans companies from putting that recycling symbol on items that aren't routinely recycled in California and turned into a new item. It's a demand for "truth in advertising." The senators who promoted the bills are strong proponents in the concept that "labels should mean something."
According to the article, one 9% of plastic waste has ever gotten recycled. We may be all "wishcycling" like happy little eco club members, yet it winds up floating on the wind, landing in waterways or the side of the road, or deposited in dumps and landfills. Things aren't as recyclable as we think, which in turn messes up the whole process, sometimes landing a lot of items that could be recycled into the dump because we have contaminated them by over-including non-recyclables.
Why does this happen? Companies have greenwashed us into having more faith in the recycling system than it can handle. Back to that truth in advertising that is tied up in those chasing arrows.
The Plastics Industry Association likes to point out that the chasing arrows were not supposed to be a message about an item's recyclability, but instead they are more an indication of what the item is made of. A grading system, if you will. Yet, that message certainly has gotten muddied over all the years we've seen those li'l number-filled ♻️.
California's bill will go into effect January 2024, which is all well and good, but companies will have to deal with California's restrictions and requirements AND the national ones (which still allow and accept the numbered ♻️ stamps in a less restrictive way. Clearly some bumps are ahead. Hopefully California can be a state leader for America. But, as we've seen the last few years, our country tends to wrestle when it comes to state versus national issues.
Maine and Oregon have are passed laws for making producers more responsible for their own waste. New York State has also presented labeling laws similar to California's.
For our more visual friends, here's a great CBS video news segment on this.
Maybe this will serve as role model legislation, moving us more toward sustainability and labels we can trust. Fingers crossed.
Infographic from https://www.brownrecycling.co.uk/wp-content/uploads/2015/12/plastic-recycling-code-infographic-877x1024.jpg, "What Do They Mean" image created at canva.com
Posted by Vicki at 1:30 AM