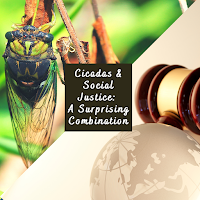 Now that it's August, the end of summer sounds of locusts and cicadas are the musical backdrop of your typical late summer soundtrack. A far more subtle and different cry from the cicada symphony that Brood X cicadas brought this past spring.

Even this spring, depending on where I went , the sound of the cicadas differed. By my school, it was a complete roar that I didn't even recognize the first time I'd heard it. From my backyard, a significantly quieter buzz. Reports from friends in both Eastern Shore Maryland and downtown Baltimore indicated that cicada sounds were actually nonexistent.The reasons were many and they all make sense:

But Ronak Shah's article in Chalkbeat made things make even more sense. Entitled "When Students Ask Why They Haven’t Seen Cicadas, We Need to Talk About Environmental Racism," this article brought about some "ah ha" moments. Ronak, a 7th grade teacher in Indianapolis, also noticed that not everyone was experiencing the sounds or signs of cicadas. Having grown up in the Midwest, I know it's not because of sandy soil. And, while Indianapolis could be considered a concrete city jungle with more streets than trees, he points out in the article that neighborhoods within the same city experienced different volumes of cicada songs (from loud to non-existent). Clearly there's more to it than being an urban, suburban, or rural thing. He notes that the cicada's presence seemed to land on historical lines: those dating back to desecration of schools which in turn led to the white flight of folks to mid-to-upper echelon neighborhoods. All of this really just perpetuates segregation in communities based on economics and how the schools are districted. This, in turn, ultimately creates the proverbial "right side of the tracks" versus "the wrong side," delineated by socio-economic status--which often times is also associated with race.
Intersectionism: where systemic racism and environmentalism and social justice collide. Case and point, this quote from Ronak's article:

"One of the lasting impacts of segregation is environmental injustice, and it impacts humans and cicadas alike. Most of our city’s toxic brownfields are located in Center Township south of 38th Street and along the northern Mass Ave corridor, another line of segregation. The lingering arsenic, mercury, and lead in water and soil impacts human health while also sickening or killing cicadas gestating underground. These lands are often paved over to become asphalt deserts, and the compacted, rubble-filled soil that drives flood water into people’s homes also makes it harder for cicadas to burrow, let alone emerge. Trees are scarce, and greenhouse gases are abundant, creating urban heat islands that confuse the bugs and leave little room for cicada breeding, all while contributing to disproportionately higher asthma rates in people. Redlined housing practices forced a higher population density into racially segregated areas, which means less available land for cicadas to hatch." 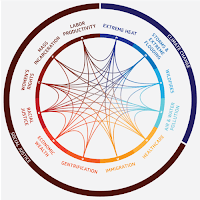 The fact that scientific data on Brood X dates back to historical data and timellines of Indianapolis is striking because it goes to show how tied and interrelated things are. It goes to show how much information (in other fields of study) has historical roots. It reminds me of Spanish philosopher George Santayana's quote that often pops into my mind (guess I must be an educator): “Those who cannot remember the past are condemned to repeat it"... or Winston Churchill's version:“Those that fail to learn from history are doomed to repeat it.” It is our duty as educators to teach history. All of it. The good, the bad, the ugly, and the uncomfortable. Whether it's about cicadas or just about anything else.
Title image created at canva.com and Intersectionality
image from https://www.dailykos.com/stories/2021/5/5/2029108/-Environmental-Justice-Social-Justice-Economic-Justice-Intersection-of-schools-environmental-racism
Posted by Vicki at 2:00 AM