I've been watching a lot of The West Wing lately. For whatever reason at the time, I never did watch it first go around (now 2 decades later). It certainly seems better than watching the news most days. I've always remembered the abrasive cacophony of political clamor in the weeks prior to election, but the last few presidential elections have seen noisier (and more divisive) than ever before. The one silver lining is that at least it seems to have raised everyone's interest in civic involvement. 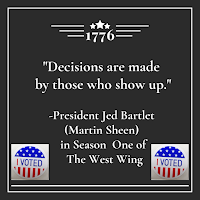 Given that, this seemed like the best post I could post one week prior to Election Day. If you haven't taken part in early voting or mail-in voting (we did the latter, dropping our ballots off at the Board of Elections) or making a game plan to go in person, do so. Vote. Take advantage of making your voice heard. Take part in your civic duty. Make a plan. Vote.Don't take it from me, take it from the folks at The West Wing. Both here below and in their HBO Max "A West Wing Special to Benefit When We All Vote." This remake (done in play-style with a lion share of the same actors, here 17 years later) of Season 3: Episode 15 "Hartsfield Landing" was part of a special to bring more voters to the booths. Special cameos include former First Lady Michelle Obama, President Bill Clinton,  & Lin-Manuel Miranda. It did not disappoint!

Video from https://youtu.be/ICCLdjQch9s; Quote from https://ew.com/tv/tv-reunions/west-wing-cast-reunion/ and created in Canva.com