Spending the Day Outdoors at the 'Annapolis Rising' Benefit

This past Saturday, it was a great day to be outside & in Annapolis, Maryland. 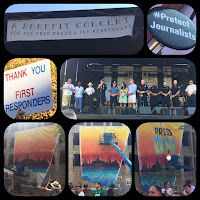 "Annapolis Rising" was an all day benefit for the Capital Gazette victims and honoring the First Responders of the June 28th shooting, which hit the community hard. In between different bands, a multitude of people (most journalists) spoke on the 1st Amendment and the tragedy at the Capital Gazette.


The overriding theme du jour in everyone's was that journalists go into their careers to help inform citizens and maintain the transparency needed to maintain democracy. It's the 1st Amendment for an important reason... and sadly they are now on the front lines, often facing hurt and danger due to swirling hatred against the free press. 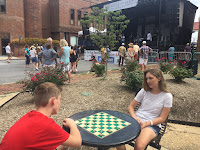 I was there with my two kids, who are now old enough to get the meaning of the speeches, but also young enough that hanging out listening to speeches isn't necessarily their thing. That's when we were given a gift that made the whole experience so much more palatable to my kids. Right near the playground were several checkerboard tables, which were perfectly placed to hear the bands and the speakers. The best table (aka, the one closest to the stage) was open, so we sat down. We were delighted to have the table, but one thing was missing==the checkers!

This, however, was a very easy problem to solve. Maybe it's the fact that I'm a teacher and pretty much live in teacher-mode... or maybe it's due to the fact that I'm re-reading Richard Louv's "Last Child In the Woods"... or maybe it just simply because I write an environmental education blog. Whatever the reason, nature and garden space surrounded us in this urban environment, so we just had to be a little creative. Mulch and dropped cherry-berries (I have no idea what kind they were, dropped from the trees) served as our checkers. A few passer-bys marveled at our innovation. We played multiple games against each other, landing ourselves in the perfect location to enjoy the day, the music, and the speeches. It was a great way to soak up our civics lessons. 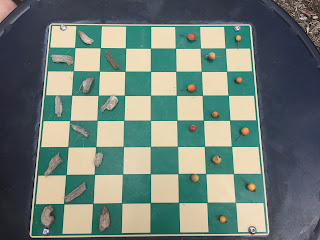 (I think it also served as inspiration to others. When we finally decided to change up our vantage point and leave the table, we left the board set up, ready to play. Later we saw people following in our footsteps, playing their own game of Mulch & Cherry Checkers. Felt kind of good to be trendsetters!) 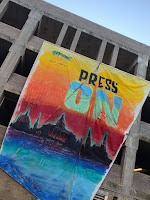 Our checker table also served as an excellent place to watch the making of a mural. The canvas: 3 adjoined sailboat sails--perfectly symbolic for Annapolis and its sailing culture. They were being spray painted with the skyline of Annapolis & the message "Press On," painted by two artists from atop a cherry picker machine lift. Fitting for the day indeed!

The freedom to be in at a public street benefit, to feel safe there, to enjoy the beautiful day, to listen to wise journalists concerned about their lost colleagues [taken violently at their place of work] during an era of the frequent anti-news rhetoric... it all really caused me to take pause. I'm grateful for our American freedoms. I was struck how easily we can take them and democracy as a whole for granted. I was thrilled to be able to pick up the paperwork with my daughter at the table set up to register voters. We will be filling that out this week and mailing it in. I don't want to delve down the deep and dangerous road of politics, so I will end with this:

"When the public's right to know is threatened, and when the rights of free speech and free press are at risk, all of the other liberties we hold dear are endangered." —Former US Senator, Christopher Dodd


Images of the day: from either my camera or my friend Heather's! Collage compiled in the Li-Pix Pro app.
Posted by Vicki at 4:00 AM