A Golden Experience, Biking the Bridge

We've just returned from a whirlwind trip to California. We packed about as much into a week as we possibly could in the Silicon Valley area, including San Francisco area & a hop over to Napa. When your days are numbered, your days are full! During our week (because this summer I am counting), we spent at least 52 hours outdoors. Odds are high, we spent at least that same amount of time engaged in techie activities as well. Given all of that, you can imagine the number of blog posts waiting to be written!

One of our highlights of the trip was our day of greatest outdoor adventure: we rented bikes and pedaled 14.6 miles in San Francisco. Not bad for a girl with bad knees who hasn't been on a bike in over 2 years. Remarkably, the bike was far kinder to the knees than all our walking had been! (Many a day we cranked out over 15,000 steps...one day totaling over 20,000 with the hills of San Francisco!) 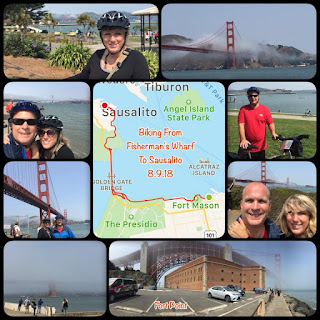 Our sights that we saw: Fisherman's Wharf, Alcatraz, Angel Island (the West Coast Immigration entry point from 1910–1940), Crissy Field, The Presidio, and Fort Point (at the base of the Golden Gate Bridge). We then biked across the Golden Gate Bridge (despite the huge number of bikers and pedestrians that were often in the way)! I'm still a little in awe as I write it again here. It was a pretty amazing adventure indeed.

Not only was it so good to be outside all day (oh my, the weather was perfect!)... but the wealth of sights that we saw and the ground that we covered in the city. It was remarkable watching the fog roll in—especially while we were on the bridge. It would go from clear to foggy and back again. At one point it was almost like a white curtain wall came down next to the fence, blocking our sight of the water of San Francisco Bay! The same fog made the towers ahead of us on the bridge completely disappear for 7 minutes or so. 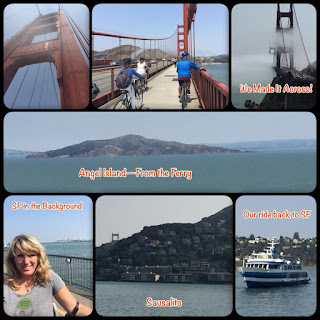 After crossing the bridge, we then trekked down to Sausalito for lunch, ducked into a shop or two, and took the ferry back across the Bay--with Alcatraz on one side of us and Angel Island on the other. (After the bit of a bike ride back to the bike rental shop--which of course was just over that one last hill-- an Über ride back to the hotel and a nap were both well-placed!) 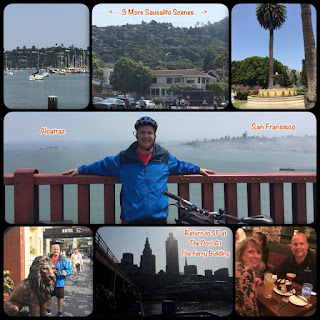 Prone to being a thinker anyway, I spent a lot of time in mental meanderings during the ride and given the view. A large goal of my trip (which is why it started in Silicon Valley) was to be in the innovation center. The bridge was known as an engineering feat when it was created--the longest bridge span at the time. Likewise, I was struck by the innovative history of the cable cars, historic streetcars, and electric trolleys. Fast forward to their Muni metro system, their electric buses, and even our Über. The dichotomy of all was something I found fascinating. Naturally, San Francisco is a city ripe with history as well as known for its forward thinking. All of it adding richness to my whole experience!

To learn more on the history of each of these, check out the following links:

Images: from my camera, compiled in the LiPix app. Map from Map My Run app.
Posted by Vicki at 2:30 AM