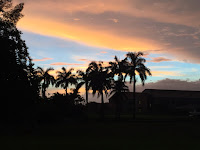 While down in Florida earlier this summer, one of our beach days was spent at Captiva Island We got there by way of driving through Sanibel. In addition to having a glorious day basking in the sun, sifting through shells, and walking the beach. (Not to mention going to the best bookstore ever: Gene’s Books in Sanibel. That totally could have derailed us from that beach day! Nirvana! The perfect place to get a handful of beach reads!!) 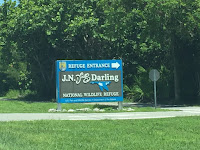 I was thrilled to see we were driving right past the J.N. "Ding" Darling National Wildlife Refuge. In the travel magazine I had of the area, I was instantly getting sucked in, knowing that we’d have to do a stop on the way back from the beach!

Having learned about Ding from a book of environmental biographies that I love, I knew a bit about him. Jay Norwood Darling was an avid conservationist during the 1920s to 1940s. Born in Norwood, Michigan and growing up in Sioux City, Iowa on the Missouri River, he had a lot of opportunity out in nature. He became a cartoonist for the Sioux City Journal, later joining the Des Moines Register. He started signing his works “Ding” as a way of short-cutting his last name.

Ding's political cartoons became syndicated in 130 daily newspapers, spreading forth not only his cartoons but his wit and satire. He won the Pulitzer Prize for his work twice: in 1923 and 1942, and was highly revered across country by a multitude of newspaper editors. To see his art (which has copyright restrictions tied to it) go to his gallery by clicking here.

In July of 1934, at the request of President Franklin D. Roosevelt, Darling became head of the U.S. Biological Survey (the predecessor to the U.S. Fish & Wildlife Service.) He did approximately $17 million worth of wildlife habitat and established the Migratory Bird Conservation Commission. Among his triumphs, he started the Federal Duck Stamp Program, where the monies from the sales of the duck hunting stamps purchased habitats—drawing the first duck stamp!

This, of course, shows he’s a great champion to the environment, but what does this have to do with Florida? 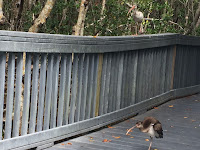 Being a lover of nature, Ding had a winter home on Captiva for many years. His love for the area and for wildlife made it a natural spot to set up a refuge. Especially when you factor in that 250 different species of migratory birds pass through the area and have since been spotted there since it’s beginnings in 1945. Knowing those numbers, I started taking count. I was particularly thrilled when two exotic birds and an iguana greeted us at the gate. Of course, being late mid-day June and the heat of summer (rather than morning, evening or a cooler season), I only got up to a count of 12 different types birds. 13 if you count the mosquito as one!! (I swear, we were swarmed on a 1/3 mile hike in the refuge, with multiples munching on us simultaneously. My husband captured the picture of me running away in escape to get out of the chomp zone….notice that picture was not included! 😉) 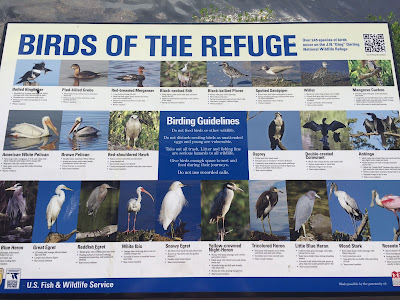 Here's an amazing video that captures some of the beauty of the Sanibel & the Refuge, from the Ding Darling Society.


And yes! There’s an app for that!  The Discover Ding app helps make it more interactive once you are there. Likewise, a general QR reader will help you read the signs that are out there at several stops among the refuge for you as well, linking to videos and other pieces of information. 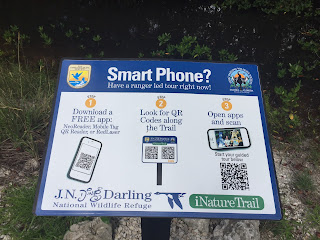 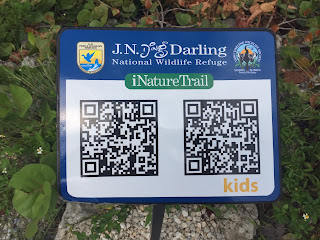 To learn more about the Refuge and Ding Darling, check out these links. 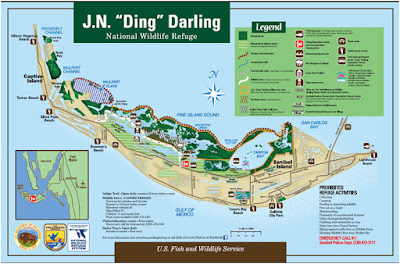 Video from https://www.youtube.com/watch?v=hzEfZyU7sNs, Map https://www.fws.gov/dingdarling/VisitorInformation.html, Ding Darling image from http://santivachronicle.com/Content/Latest-News-/Latest-News/Article/J-N-Ding-Darling-The-Cartoonist-Conservationist/19/18/124;  Duck stamp pic from https://www.dingdarlingsociety.org/articles/our-namesake; all other photos from my camera
Posted by Vicki at 9:58 PM