Unless you have been living under a rock, this should not be new news. It's been all over social media and news networks for a good month!

Given the trajectory and the tilt of the Earth's axis, all of North America is in prime position to see the sights of this total solar eclipse. (For a bigger map, go here.)  Given that fact, it's come to be known as "The Great American Eclipse. The last time an eclipse trekked across the contiguous United States was June 8, 1918--just over 99 years ago! 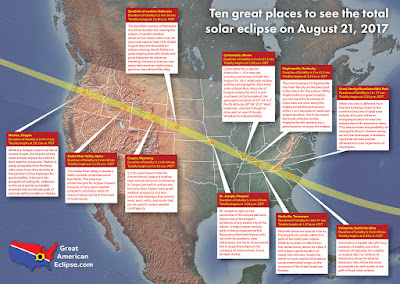 Of course, you can't go "just watch" an eclipse. There are certain things you need to do to make sure you have created a safe situation for your eyes due to the intensity of the sun's rays during an eclipse. Here's a great infographic from Crofton Family Eye Center helping you know how to best approach this rare event.

The posters, created by artist, educator, & Astronomer Tyler Nordgren, follow the style of the Works Progress Administration of the mid-1900s. What striking advertisements for a great once-in-a-lifetime event! Visual reminders to help us all remember to mark our calendar for next week!!

To do some more digging on the details of this total eclipse, check out Space.com, Vox & The Great American Eclipse (both of which they have detailed maps of the track). ISTE also has a list of 7 resources to teach about the solar eclipse. You can also be a citizen scientist through Eclipse MegaMovie 2017.

And then there's NASA: