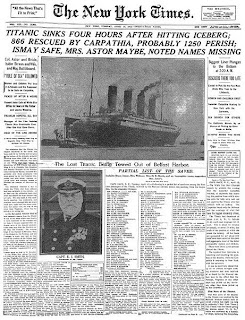 Okay, I'll admit it...I'm a Titanic junkie.
It's true.  There's something about the whole phenomenon that captures me.  I know all about the White Star Line.  I've seen the movie a gazillion times (I always seem to forget that 1/2 way in, there's a major tragedy and the movie's a downer.)
I know all about how it set sail on April 10th, 1912.  I know about the semi-creepy, ominous, superstitious, history of it nearly crashing upon it's dock departure from Southampton, England (where it nearly crashed the dock and another ship before leaving harbor).  I know all about it's "unsinkable-ness."  I know all about it's commentary on the classist society of 1912. I know about the disregard to the ice warnings the night of it's demise.  I most certainly know ALLL about it's fateful day (or night rather) April 14th, 1912 when it scraped an iceberg and riddled it's holding tanks, making it bottom heavy.  I know about it's half-filled life boats, and it's enormous loss.  Thus said, I know all about it's sinking, and splitting in half, April 15th at approximately  2:20 am.
I know about The California and how it missed the S.O.S. messages of the Titanic.  I know about The Carpathia, and how it came to the "rescue" (tho late due to distance).  And I know about all about it's findings in 1985 by Robert Ballard with the help of robotic submarines Alvin & Jason Jr.
Therefore, I find the article posted under the title "Plastic Bag Found Floating Near Titanic Shipwreck:  Trash is Evidence of a Different Kind of Tragedy on the Ocean"(at  http://www.msnbc.msn.com/id/39077683/ns/technology_and_science-science ) particularly bothersome.
As stated int he article by David Gallo, of the Woods Hole Oceanographic Institution (WHOI) in Massachusetts:

"We look at Titanic as the greatest disaster at sea, but the Titanic was a single tragic event. What we are doing to the sea on an everyday basis is one of the great untold tragedies," Gallo told OurAmazingPlanet.

So to see a near-100-year old tragedy flanked with a modern-day plastic infraction...incorrigible.  It's a definite head-shake-worthy, "You are kidding me!" event.  Let's just add insult to injury...at what point is everything on the ocean bottom just going to be buried under a big pile o'plastic?
Posted by Vicki at 12:35 AM