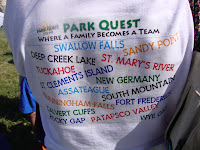 Maryland Park Quest's 2010 motto was: "Where family becomes a team."  After taking part in yesterday's Park Quest Grand Finale (which, to take part in, you had to complete a minimum of 10 of the 24 Maryland State Park Quests from Memorial Day to Labor Day 2010 to qualify), there could be some other mottos as well. "MD State Parks:  Where a family finds fun!" or "Maryland:  Where a State Builds Outdoor Adventures & A Community!"  On virtually no budget, Maryland Department of Natural Resources did an amazing job! Not only did "Team Dabrowka" (who was decked out in our FL Gator Gear yesterday) have a good time with the 13 Quests we nailed out...but we found the Grand Finale to be totally top notch!!  Add to it, Park Quest 2010 filled our summer with some great local getaways, and some super summer memories and unique outdoor adventures that we wouldn't have had without the guidance of the Park Quest.  Double thumbs up from us!! 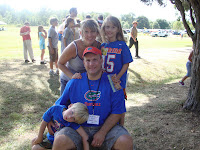 It probably didn't hurt that yesterday at Maryland's Gunpowder Falls State Park  we had idyllic weather.  You couldn't ask for anything better!!  But to have a 4-hour window of time in the great outdoors with 20 mini-quests ahead of us, our day was filled...and fun-filled, at that!! 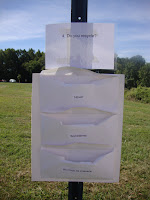 We geocached...we identified photos of the Maryland Parks and also flora and fauna....we had an adventure in letterboxing...we investigated our carbon footprint...we determined what was wrong with a camping area given the "Leave No Trace" philosophy....we played frisbee disk golf (not necessarily well, I might add)....we saw birds of prey and reptiles at the Scales & Tales table....we bungled along with orienteering while trying to figure out how to read a compass....we awkwardly & unsuccessfully crab walked during the Crab Trap Relay (well, okay, the over 30 set had trouble with that!)....we practiced casting a fishing rod.... we used an Indian tank to put out campfires (yes, pretend ones!)....we played Colonial games & learned some Maryland History along the way....we met and chatted with both park rangers and the Volunteer Mounted Patrol....and we conquered the Outdoor Team Challenge and got our team to the otherside of a rope spider web.  WE HAD FUN FUN FUN...as a family, as a team, in the great outdoors! 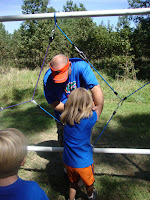 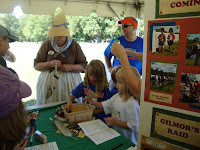 Yes...Thank you Governor Martin O'Malley for your support in this activity and for your Children's Outdoor Bill of Rights (from http://www.governor.maryland.gov/documents/OutdoorBillOfRights.pdf):

NOW, THEREFORE, I MARTIN O’MALLEY GOVERNOR OF THE STATE OF MARYLAND BY VIRTUE OF THE AUTHORITY VESTED IN ME BY THE CONSTITUTION AND THE LAWS OF MARYLAND, HEREBY PROCLAIM THAT EVERY MARYLAND CHILD SHALL HAVE THE OPPORTUNITY TO… 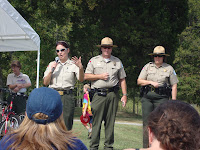 At the wrap up ceremony, as trips, camping equipment, and even a family-foursome of bikes were given away to 10 of the 100-ish qualifying families (from the 750 families that originally started up), Candus Thomson looked on.  For those of you who remember,  Candus (of the Baltimore Sun's Outdoor Section's fame,) did the Park Quest 24/7 personal quest to do all 24 Park Quests in 7 days.  To see her final story of both the Park Quest Grand Finale and Maryland's "Diamond Jim" fishing tournament, go to http://www.baltimoresun.com/sports/outdoors/bs-sp-thomson-column-0912-20100907,0,4780654.story?track=rss 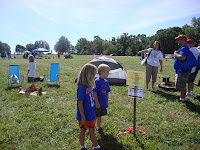 To learn more about 2010's Maryland Park Quest Grand Finale, click the title above, or go to  http://www.dnr.state.md.us/parkquest/finale.asp. And for those of you who are local, be on the lookout come spring for the sign up for Park Quest 2011.  Team Dabrowka, for one, will be there!
Posted by Vicki at 11:58 PM