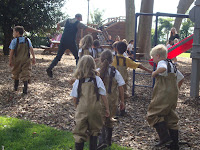 They say a picture is worth 1000 words....Add in a press release and an article from The BayNet, that could be worth about 2000 words!  Check out what we had going on at Eagle Cove School on Friday, September 17th, 2010.  Maryland Green School?  I'd say!!
(Of course, with all the paparazzi on the dock, myself included, I thought for sure it was only a matter of time until I went in!! Luckily, I managed to make it out dry--camera and all!) 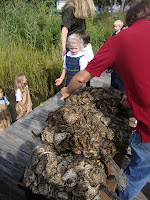 The Maryland Department of Natural Resources (DNR) and the Oyster Recovery Partnership (ORP) delivered oyster cages and spat Sept. 17 at two points along the Magothy River in Anne Arundel County as part of  the State’s Marylanders Grow Oysters program. The Magothy River oyster growers, lead by the Magothy River Association, are beginning their second year as participants in the project. The thriving program launched by Governor Martin O’Malley in 2008, expanded by seven new rivers this summer to a total of 19 Chesapeake Bay tributaries.
“I am very pleased the Marylanders Grow Oysters program has continued to grow and additional citizens are taking an interest in restoring our oyster population while taking an active role in stewardship of our Bay,” said Governor Martin O’Malley. “With the support of these new organizations, we can continue the successes of this citizen-based program.”
Early this morning, a delivery was made to Cape St. Claire, followed by a drop-off at Eagle Cove School in Pasadena. The distributions cover both the northern and southern shores of the Magothy River.
Chosen as a distribution point, Eagle Cove School promotes and supports programs and initiatives in Environmental Studies. At all grade levels, ECS students are involved in environmental learning and projects that increase their awareness of environmental issues, their partnering skills, and their confidence in people’s ability to effect positive change in the world.
"Eagle Cove School is proud to be an oyster spat distribution point for the Marylanders Grow Oysters program,” said Laura Kang, Head of School. “We are a Maryland Green School, and all students receive hands-on environmental learning. The kids are really looking forward to helping move spat bags to the water, and learning about the oyster recovery efforts here in our own Magothy River. " 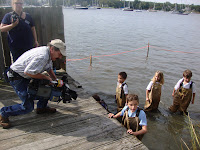 Marylanders Grow Oysters began with one river in Talbot County in 2008. During its second year, a total of 12 rivers were participating.
“Stewardship of a diminished resource such as the Bay’s oyster population is vital for its long-term recovery,” said Stephan Abel, Executive Director for the Oyster Recovery Partnership.
“Having Marylanders actively caring for these oysters will increase the public’s awareness and understanding of this keystone species and all that is involved to bring them back. The Bay’s recovery is dependent upon everyone doing their part.”
Under the program, which is run by DNR with assistance from the ORP, more than 1,000 citizens now participate in Marylanders Grow Oysters. Last year the 12 rivers were stocked with spat in 6,123 cages. By the end of October this year, approximately 8,000 cages and spat will have been delivered to new rivers and those already participating.
“To implement the program, the river coordinator is essential,” said Chris Judy, shellfish biologist with DNR’s Fisheries Service. “Without our local coordinators, the program wouldn’t work.”
DNR and the ORP will work with the seven new local coordinators that have volunteered to support the program’s expansion. These volunteers will identify waterfront property owners willing to become oyster growers, and deliver oyster cages and young oysters to growers in their respective tributaries. 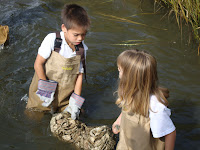 The oyster cages for the program are constructed by inmates under the supervision of the Maryland Department of Public Safety and Correctional Services. The spat come from University of Maryland Center For Environmental Science Horn Point Laboratory in Cambridge. Marylanders Grow Oysters, a program under Governor O’Malley’s Smart, Green & Growing Initiative, Program, is being managed by the Maryland Department of Natural Resources in conjunction with the Oyster Recovery Partnership, the University of Maryland Center for Environmental Science and the Maryland Department of Public Safety and Correctional Services. For more information about Marylanders Grow Oysters visit www.dnr.maryland.gov/oysterproject
Introduced by Governor Martin O’Malley in October 2008, Maryland’s Smart, Green & Growing initiative was created to strengthen the state’s leadership role in fostering smarter, more sustainable growth and inspiring action among all Marylanders to achieve a more sustainable future. The initiative brings together state agencies, local governments, businesses and citizens to create more livable communities, improve transportation options, reduce the state’s carbon footprint, support resource based industry, invest in green technologies, preserve valuable resource lands and restore the health of the Chesapeake Bay. 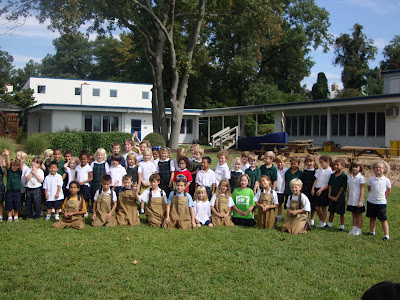 Pictures from my camera.  To learn more about Eagle Cove School & our environmental program, click on the link above or go to http://www.eaglecoveschool.org/environment .
Posted by Vicki at 3:57 PM