'Tis the season, with Earth Day having just happened and while still being able to see it here on our April calendars, for heightened awareness on all things Mother Earth.

I ran across a Substack post by Amy Westervelt entitled "Climate Rage is Sexy." Interesting timing given we just had Women's History month and I also recently finished the book Rage Becomes Her: The Power of Women's Anger by Soraya Chemaly. Rage apparently is all the rage. With good reason! With our "sheltering in place" this last year due to Covid, it gave us grand opportunity to be captive audience to the heightened awareness on racial and social injustice over the past year. Add in a rather contentious election in 2020, a lot of "-isms" have been in the forefront of all our minds. Media and social media screamed all of the above this past year.

Even Mother Earth seems a tad pissed off when you look at our rising climate issues, the wild fires of the past 18 months, the pandemic, the melting of polar ice sheets, growing food waste and plastic pollution, biodiversity degradation....the list goes on. So, yes, Amy Westervelt is right, and the rage is on when it comes to climate change.

Here are some visuals, created from Amy's "Climate Rage is Sexy" text that I found at Future Earth's Facebook Page. Just like Saroya Chemaly wrote in the above-mentioned book, "When a girl or woman is angry she is saying 'What I'm feeling, thinking, and saying matters.'.... We are living in what feels like an age of pronounced rage and near-constant outrage." [Locations 188 & 208 in the Kindle version.]

I think it's time for us all to embrace our climate rage--for it is through doing so that we will take action. The time is now for doing so! 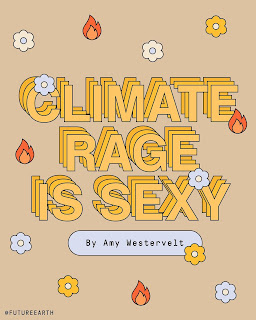 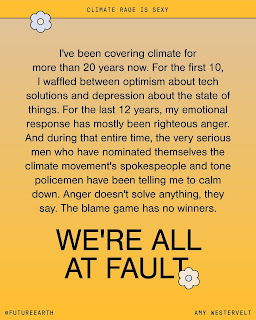 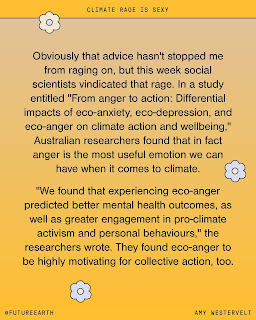 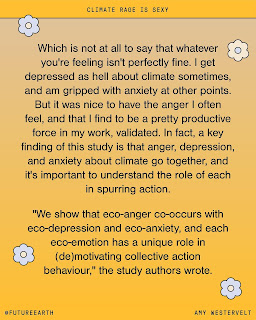 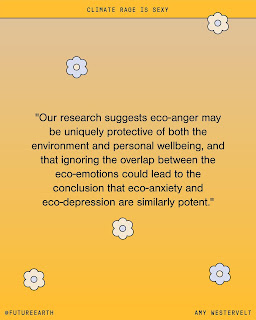 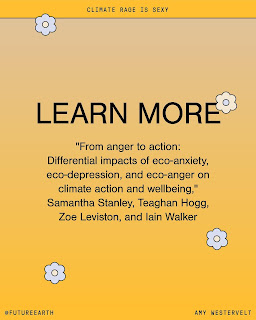 Images from https://www.facebook.com/futureearthcatalog/posts/921697871909203 and credited to Credit: “Climate Rage is Sexy” by @amywestervelt via Hot Take
Posted by Vicki at 12:45 PM