One of the many treasures in the book No Planet B: The Teen Vogue Guide to the Climate Crisis (Edited by Lucy Diavolo, 2021) is the chapter in the Activist Section titled "Nine Teen Climate Activists Fighting For the Future of the Planet." Like much of the book, it's from environmental articles posted in Teen Vogue--this one by Marilyn La Jeunesse, published in the magazine on July 24, 2019. In her article/chapter, she highlights 9 Generation Z activists making bold moves to make a difference in our world. 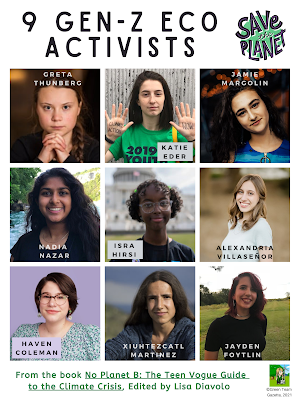 Here's what these young activists are known for, their age as of this writing, and where you can go to find out more about them!
Greta Thunberg, 18
Perhaps the most well-known on this list, Greta has received numerous awards and recognition (including her Nobel Peace prize nomination in 2019) for her school strikes on climate justice and is an avid spokesperson on this issues in many global forums. You can see her timeline of her activism on this website and she is active on Instagram, Facebook, Twitter, and Youtube.
Katie Eder, 21
As a Stanford student, the Executive Director of Future Coalition (a youth activist organization), and an avid environmentalist since 6th grade, Katie probably never gets bored. She's organized climate strikes, 50 Miles More (to promote the end of gun violence) and helped from the #AllEyesOnJuliana campaign in June 1, 2019 day off press conferences(when she was approximately 18/19 years), which supported the climate lawsuit Juliana vs. the United States government.
Jamie Margolin, 19
Jamie is the cofounder and co-executive director of Zero Hour, another activist group for our Generation Z'ers on climate change and justice. She's a plaintiff on the climate lawsuit in Washington state of Our Children's Trusts' Youth v. Gov. She is also the author of Youth to Power: Your Voice and How to Use It (2020). She is also open about her experience as an LGBT person. You can find her at Twitter, Instagram, and Facebook.
Nadia Nazar, 19
Nadia joins Jamie as cofounder, co-executive director, and art director of Zero Hour. With these pursuits she has also organized the DC Youth Climate Strike and the lead from Maryland for the U.S. Climate Strikes. She testified in front of Congressional committee on climate change in February of 2019, and she is also a student at Maryland Institute College of Art. You can find her on Twitter or on her art-inspired website.
Isra Hirsi, 18
She and Haven Coleman co-founded (and are co-executive directors of) the U.S. Youth Climate Strike in 2019. She is also the daughter of U.S. Congresswoman Ilhan Omar. She was active this election to help educate voters on the presidential candidates' views on climate change. She is also a Foodprints for the Future Ambassador for Earthday.org. You can find her on Twitter and Instagram.
Alexandria Villaseñor, 16
Alexandria began her activist career following Greta Thunberg and the school strikes. Alexandria is the founder of the climate change organization Earth Uprising and is also involved in the U.S. Youth Climate Strike. You can find her at Twitter, Instagram, and Facebook.
Haven Coleman, 15
She and Isra Hirsi co-founded (and are co-executive directors of) the U.S. Youth Climate Strike in 2019. She founded the ARID Agency for climate and social justice in 2020. She's also been very active speaking about, promoting, organizing, and leading climate events. You can find her on her website, Twitter, Instagram, and Facebook.
Xiuhtezcatl Martinez, 20 (bday may 9)
As an Indigenous climate activist, Xiuhtezcatl began speaking out at climate summits back when he was 6 years old. He's the Youth Director of Earth Guardians, author of We Rise: The Earth Guardians Guide to Building a Movement that Restores the Planet, and a hip hop artist with an environmental slant. He is also a plaintive in Juliana v. the U.S lawsuit. You can find him on Facebook and his website.
Jayden Foytlin, 17
Jayden also is an Indigenous (and Cajun) climate activist and one of the 22 plaintiffs in Juliana v. U.S. She is also an avid protestor of the Bayou Bridge Pipeline which would cary oil from the Dakota Access Pipeline to Louisiana.
Images from:
Book cover from https://www.amazon.com/No-Planet-Vogue-Climate-Crisis/dp/1642592595/ref=asc_df_1642592595/?tag=hyprod-20&linkCode=df0&hvadid=475689877582&hvpos=&hvnetw=g&hvrand=10868309235414858719&hvpone=&hvptwo=&hvqmt=&hvdev=c&hvdvcmdl=&hvlocint=&hvlocphy=9007872&hvtargid=pla-1155211154062&psc=1;
Graphic created at www.canva.com using photos from the following:
1. Greta Thunberg: https://www.theguardian.com/world/2019/mar/11/greta-thunberg-schoolgirl-climate-change-warrior-some-people-can-let-things-go-i-cant
2. Katie Eder: https://www.forbes.com/profile/katie-eder/
3. Jamie Margolin: https://earthoptimism.si.edu/about/2020-summit/speakers/jamie-margolin/
4. Nadia Nazar: https://www.ioes.ucla.edu/person/nadia-nazar/
5. Isra Hirsi: https://www.earthday.org/foodprints-for-the-future-ambassadors/
6. Alexandria Villaseñor: https://twitter.com/alexandriav2005
7. Haven Coleman: https://havencoleman.com
8. Xiuhtezcatl Martinez: https://www.earthisland.org/journal/index.php/magazine/entry/xiuhtezcatl_martinez/
9. Jayden Foytlin: https://www.ourclimatevoices.org/2018/jadydenfoytlin
Posted by Vicki at 2:00 AM