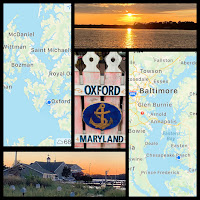 I've been thinking a lot about climate change lately. It started recently when I ran across the Grist article by Miyo McGinn "When Teaching Kids About Climate Change, Don’t be a Downer." I've seen that in my own home through the years as my kids have lived with their eco-loving mama. My son has asked pretty hard questions that are fraught with concern. I watch what I say because doom & gloom gets you nowhere. 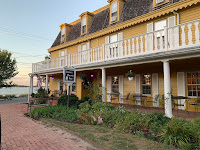 But concern heightened awareness does set in at times. The weekend of October 11-14th my husband and I were in Oxford, Md celebrating our anniversary at the very quaint, historic water-side inn (the Robert Morris Inn) for our anniversary this wkend. It was wonderful with it's small-town charm, and we loved being there and bopping over to St. Michaels by way of the oldest ferry, which was just a walk from the inn. I'd highly recommend it to anyone! 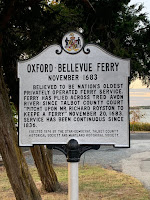 But, between the waterside placard (see below) for an art installation just across from our inn... and the water flooding the streets (due in part, we’ve been told, to the trifecta of a full moon, high tide, waters rising from Tropical Storm Melissa on its way), my mind has been heavily pondering the rising water. I had walked the ferry dock the night before, and the next day they were submerged by 4-5 inches as in the picture below. (Granted, even the night before, the water was perilously close to coming up between the boards by only an inches or so.) Parking lots were pools, and some streets were completely undrivable. 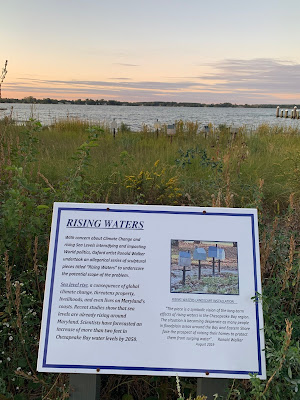 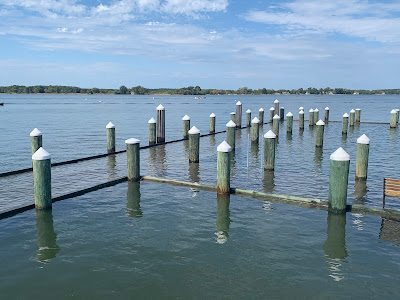 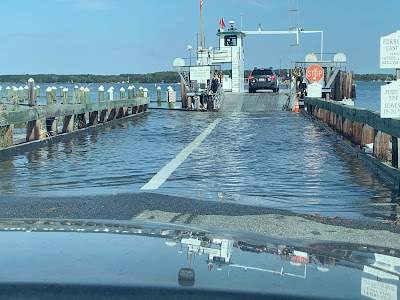 Facebook revealed that Annapolis too was mired in flooding streets--which used to be seen as a "100 year event" that has been happening every year or so. Ironic that the streets were flooding in Annapolis during a boat show weekend.

The next day, the flood waters in Oxford were down--and even more so the day after. We biked around and saw we were able to travel streets we couldn't the day before, but a restaurant we were planning to visit was still closed due to water in the kitchen. I was somewhat comforted when a shop owner said that this is not a typical high tide experience, but they did have a previous problem in September during the last big storm event. Luckily, the flood waters hadn't been this high since Hurricane Isabel in September of 2003, with a close second with Hurricane Sandy in October of 2012.

The news of Oxford's flooding events being storm-related helped comfort me. But it led to a lot of contemplation about how the rising water of climate change is going to affect a lot of people worldwide--both local to my coastal Maryland and on a bigger global scale.  It didn't help that an article in the Baltimore Sun that same weekend referencing the rising sea levels could force the Naval Academy to relocate. It took me back to Jeff Goodell's book "The Water Will Come." It felt like the foreshadowing of things to come--like the trailer to a movie I don't want to see.

This is the point where I hope a lot of our leaders get their head out of the sand--especially when the sand is getting buried!