Oyster Shaking for the Bay 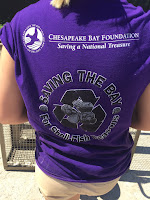 When you have a high schooler who needs service hours, you find yourself in search of new opportunities, often taking part, and often times doing so as a family.

Yesterday was one of those.

My kids and I headed down to Shady Side, Maryland to "do a little oyster shaking." Having never done that before, I wasn't quite sure what it all entailed. 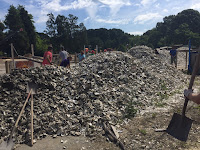 I had an bit of an idea what it was based on my days at Eagle Cove School. There, my 3rd graders raised oyster spat and had to weekly shake sediment off the oysters within the cage at the end of our school's dock. After a year of doing that every Friday in Science, we always had a spring field trip where Chesapeake Bay Foundation arrived by boat at our pier, clearly making it the best field trip ever! Once on board, we traveled along the Magothy River where the students measured salinity and turbidity before releasing the oysters into the Bay at a designated oyster sanctuary. 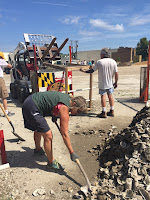 Instead, it involved shoveling oyster shells that were essentially being recycled from restaurants. Lots of oyster shells! Individually, they barely weigh anything. En masse, they aren't exactly light! I'm feeling it in my back and arms today after 2 hours yesterday of shoveling the shells into a super-sized sifter, then shaking out all the dirt and sediment, then lifting the sifter to dump them into the cages. These cages will later be taken to giant vats to be further cleaned with water, then deposited on their oyster boat, and delivered to a variety of oyster sanctuaries in the Chesapeake Bay.  It was quite an operation! 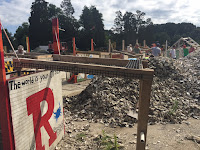 We were 3 of the 15 or so volunteers that showed up at the Maryland Oyster Restoration Center for the 4-hour Friday volunteer window. It became pretty clear to myself and my two kids that we'd never make it all four hours in the 90° heat! We were proud of our two hours of "mission completion"--with loads of hydrating and some recovery time in the shade to get our 2nd, 3rd, or 4th wind. It was definitely physical work, and we went home quite sweaty and grimy by the end of our morning!

As with any degree of service activity, there's always that element of feeling good at being a part of something outside yourself. Shoveling gives you some reflection time.  I had a few other major take-aways from the experience as well: 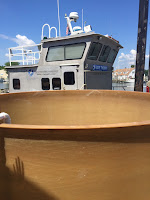 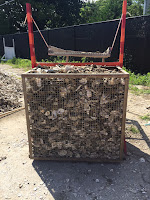 Speaking of which... there are still more oysters! If you are in Maryland and want to do something good for the Bay, clear a Friday morning or two this summer. Head to Chesapeake Bay Foundation's Shell Shaking page to learn more and register for one of the following dates:

For other, less hefty volunteer opportunities through CBF, be sure to check out their website. 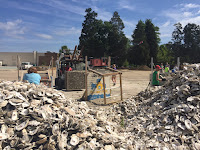 Special thanks to Anna Mudd, CBF's Maryland Outreach & Advocacy Manager for showing us the ropes, educating us along the way as to why shell shaking was such a vital part of Bay restoration,  encouraging us to take breaks, and giving us a tour of the facility. We learned a lot from you and it was a great way to spend the day!

Images from my camera at the Maryland Oyster Restoration Center in Shady Side, Maryland.