How are you spending your year of hours? It's a good question to consider. 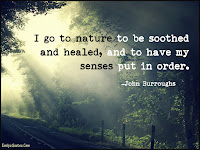 Across my Facebook Newsfeed lately, I've seen a lot of talk about "1000 hours outside." Not terribly surprising to keep seeing and re-seeing that, as I'm an environmental education blogger who follows a slew of environmental websites via Facebook.

Initially when I saw it, I was thinking it was specifically a summer challenge. Of course, upon digging and doing some mathematical calculations, that would be a major challenge indeed at nearly 12 hours per day for the 3 months of summer! 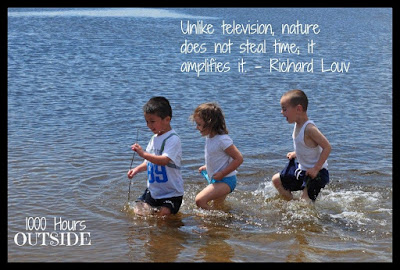 Rather, the challenge is an annual one, making the daily goal 2.7 hours per day (think 2 hours and 45 minutes). Likewise, the "1000" piece wasn't chosen only for it's roundness notable-number self. Instead, it was chosen since that's approximate average that kids under the age of 8 spend on screened devices a day, based on the 64 page October 2017 Common Sense Media Report. Their exact findings for kids aged 0-8 was 2 hours 19 minutes. (You can find a one-page synopsis of the Common Sense Media report here.)

Of course, as kids get older, those numbers go up. Tweens (aged 8-12) were noted as using 6 hours a day of tech, whereas 12-18 year old teenagers' numbers went up to 9 hours per day. This does not include school demands, which of course more frequently include devices as well.

2 hours is also the recommendation of screen time from the American Academy of Pediatrics for kids aged 2 and up.

No matter what age, that's a lot of indoor activity time. Hence the need for a counterbalance.

1000 hours outside is not a novel 2018 idea. When I started doing some digging, I discovered it goes back at least 5 years and can be found on many-a-Pinterest Board. I also found some incredible places to start for inspiration.

As of this point of this 3rd day of June, I'm a wee 4 hours in. (The weather hasn't cooperated--nor have my aging/aching knees--and I've allowed that to be my stumbling blog.) A true 1/4 of 1000 would put me to 250 hours outdoors out of 2,190 hours total. Can I do it? Time will tell, as will my recorded calculations come August 31st. Stay tuned! 😉