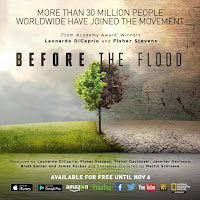 Nothing says Friday night like an #eco documentary.  That was me a few weeks ago watching Before The Flood" Leonardo deCaprio's & Fisher Steven's eye-opening 2016 documentary on climate change.

I'd like to invite President Elect Trump to watch it, especially as he is considering drawing America out of the Paris Climate and has positioned a climate skeptic to be the head of the Environmental Protection Agency.  I am glad to hear that he met recently with both Leonardo and Al Gore.  I'm sure they both were more persuasive than I could be in getting Donald Trump to watch the film. I hope Trump watches, listens, and soaks in the facts.

By November 17th (which takes us post election), 60 million people had viewed "Beyond the Flood" either on National Geographic Channel (during the week of Oct. 30--Nov. 7 when it was offered for free) or On Demand (where people had to rent it, which is how I watched it).

When in doubt, he can always check these 13 pictures attached to the Upworthy article: "13 Devastating Photos to Show Your Friend Who Doesn't Believe in Climate Change."

Here's the short list of startling facts that I jotted down while watching the National Geographic
movie:

Be sure to check out the "Beyond the Flood" website, or watch it at any of these places:

The more we watch, learn, and know about this, the more we all can fight (should President-Elect start to counter all the gains that President Obama has made over the last 8 years).  Given the fact that large populations live near oceans, it's not just an environmental issue.  It's a national security issue. It's a global issue, and certainly a human issue. Let's hope that sanity reigns and helps guide our leaders.  To take action, the "Before the Flood" website can help you with that too!