Because Water Changes Everything 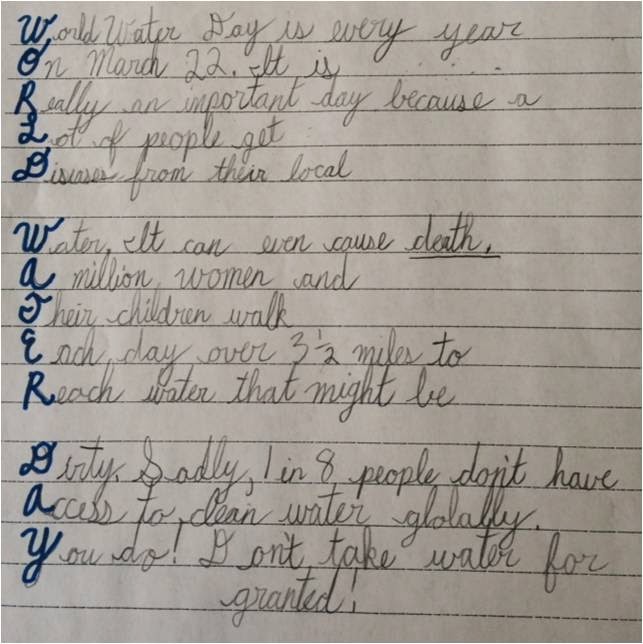 This week (like every week at school) we did our regularly-scheduled dictation activity.  The reasons are multiple--to practice spelling, capitalization, punctuation, listening, and handwriting simultaneously.  I often will do poems (as the words are easier to predict as they fall into rhyme and rhythm).  Sometimes, I go all "eco" on them.  This week was a prime example.

This week, we began by talking about the upcoming environmental days that are in March.  I must say--it led to some pretty interesting conversation! As we were talking, all of a sudden, a plea went up from several of the kids who wanted to know websites and such to share with their parents at home. Hence, a blog post was born! 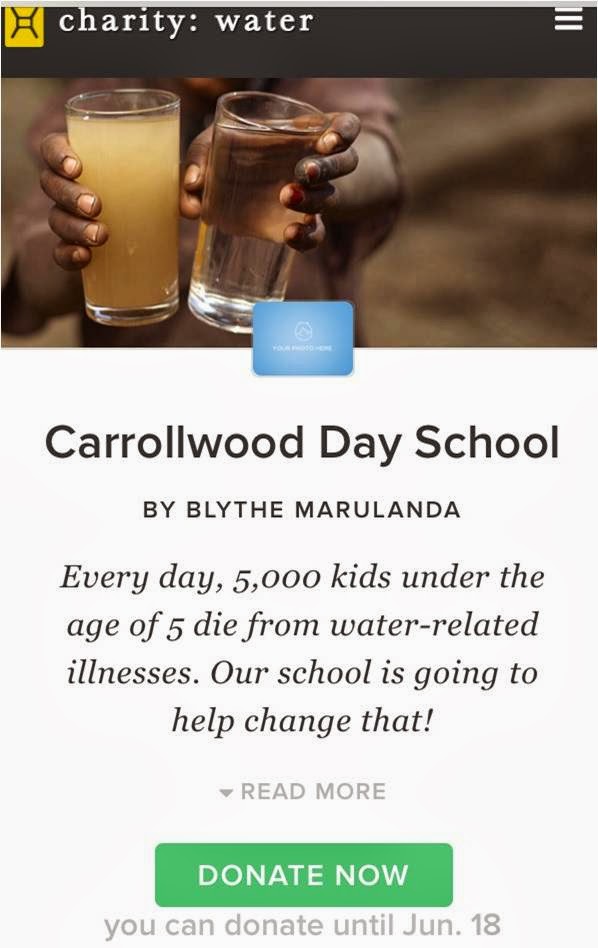 Right as we were about to begin, one of my fellas asked if he could go get a drink.  As a matter of fact: yes!  That would be the perfect lead in.  (Little did he know that our dictation (see above) was centered around World Water Day:  March 22nd annually.)

After drinks were had, thirsts were quenched, and a simple motion we all take for granted was played out... I showed my class a website that my friend (and former colleague at Carrollwood Day School [or CDS]) Blythe Marulanda created through charity: water.  She and her 4th grade class decided to set up this donation website at the end of their Water Unit, where their focus of inquiry is: "People need water to survive, and they have certain rights and responsibilities regarding its use."

You can access Blythe's site at charity: water, or by scanning the blue QR code below (I have the QR code because my 3rd graders all wanted it...and it is blue, because what other color would a "water QR code" be?!!)

Additionally, on the CDS website there is a pretty enlightening video about the effects that come from the lack of clean water. It tied in perfectly as a preface to this week’s dictation about World Water Day (click to learn more about this "environmental day!").  My students were struck how water became not only a hydration issue, but a health issue, a sanitation issue, a women's issue, a children's issue, an education issue, and a life improvement issue.

If any of these issues are issues that speak to your heart, you need to consider getting yourself over to CDS's charity: water website and donate to help improve the water quality for people who need it.  What a wonderful way to celebrate World Water Day.


Water Changes Everything. from charity: water on Vimeo.


World Water Day dictation was crafted by me from facts from the World Water Day website, and handwritten by one of my current crop of 3rd graders.
Carrollwood Day School's webpage was a screen shot from the CDS charity: water link.
QR Code generated at http://www.qrstuff.com/
Video from http://vimeo.com/charitywater/whywater
Posted by Vicki at 10:57 PM