Random Thursday evenings can bring you a myriad of things.  Given they are the night of Sept. 26, 2013 and you are in Pasadena, Maryland at Chesapeake Bay Middle School, what it'll bring you is the 2nd Annual Chesapeake Summit hosted by Maryland Senator Bryan Simonaire and his daughter Meagan Simonaire.  Inquiring minds might want to know what exactly it is that this brings.  Well, it brings together Senator Simonaire, the local community, several students from 11 area schools, and Dr. Donald "Mutt" Merritt on the subject of The Chesapeake Bay and the Oyster Restoration Program.

The 1+ hour program featured "Mutt" Merritt speaking on Horn Point Oyster Hatchery and the "true partnership between all concerned parties that led to the hatchery...and  the 3 factors that have taken our Chesapeake Bay oyster population (wonderful filters that they are) down, leading to the "demise of an inexhaustible resource:" 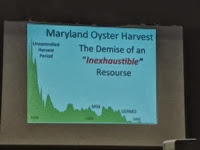 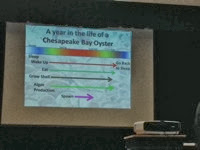 He also spoke of the environmental, economical, and social importance of oysters--how they are the Chesapeake's equivalent to a coral reef, bringing together habitat and biodiversity, not just for oysters, but for many other marine species.  Add in the historic value of oysters on both Maryland and Virginia's past, and the oysters ability to clean & filter the water of sediment, nutrients, and overall-improve the water quality of the bay and its tributaries...we need these li'l oyster guys to flourish!  Especially since humans have led to their demise.

So insert the kids and the Senator here.

The Chesapeake Summit was started to stress that point that we "always need to be doing better."  Who else to do that and show case that than children?  Senator Simonaire paid tribute to 21 individual students from 10 area schools, and the whole student body of Eagle Cove School for their work to not only help the Chesapeake Bay, but also in areas of conservation, recycling, and environmental education as brought about by the students themselves.  Students from preschool age to high school age were honored for their eco-achievements.  A lot of good things are going on in Anne Arundel County Maryland for the environment and Chesapeake Bay area!! 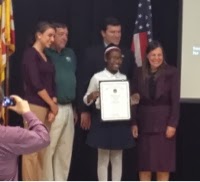 Eagle Cove School was commended as a whole school for the entire student body participating for many years now in the Marylanders Grow Oysters Program. This year, 60 bags, at about 40 pounds each, were delivered to the water to await pick up by Marylanders as Eagle Cove School served as a drop off point for later pick up by community members.  Children as young as 3 and as old as 5th grade served as that 2,400 pound total transportation system.  Senator Simonaire had citations ready for every Eagle Cove student (in addition to the other 21 students honored), and presented them to the 7 ECS children who were able to attend the ceremony with their parents.

In a world where the nightly news brings along enough bad news per night to fill up your week, it was nice to be surrounded by "the good stuff" for once, seeing these young kids from all these school, doing so many great things for our planet!! 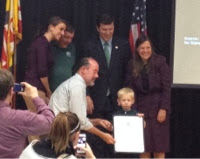 All pictures here taken from my camera the night of the event
or from the ECS citations awarded by Senator Simonaire.