Who Speaks For the Birds?

The answer to that is Roger Tory Peterson. Not sure who that is...odds are high you already know, especially if you ever picked up any sort of pocket sized, Peterson field guide. The very first ever written was the Peterson bird book "A Field Guide to the Birds," published in 1934.  His simplified system of sketches, prominent & distinguishing field markings, and brief descriptions became known as the "Peterson Identification System."  This system is now used from reptiles, to seashells, more!! 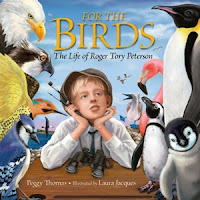 When reading Peggy Thomas' children's picture book "For the Birds:  The Life of Roger Tory Peterson," you will find it chock-full of a bevy of bird metaphors and similes, you get to see budding naturalist Roger in action as a small boy and follow him through adulthood.  In following him, you can see how he followed his passion for birding and creating an easier method of classifying them.

Given his attention to conservation, his voice out against DDT in the middle 20th century, and his help in getting it banned in 1972, it perhaps is not surprise the Roger Tory Peterson's tombstone reads "Birds cannot speak for themselves.  I must speak for them."

To learn more about Roger Tory Peterson, or build your own love of bird watching this Earth Day season, be sure to check out:

--Peggy Thomas' book "For the Birds"


"The other creatures with which we share this world have their rights too, but not speaking our language, they have no voice, no vote; it is our moral duty to take care of them."  ~ Roger Tory Peterson