I am a strong supporter of a lot of "Days."  There's Earth Day, Mother's Day, Memorial Day, Father's Day, World Water Day, Labor Day, Global Wind Day, Veterans Day, and more.  I even get the cathartic kick out of a little melodramatic soap opera every now and then by with NBC's "Days of our Lives." 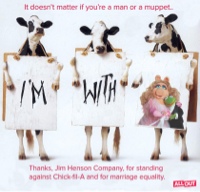 Unless you've been living under a rock the last two weeks, you can't help but to see the latest in bipartisan vitriol between Chick-Fil-A, The Muppets & Jim Henson Company, and all the Fox News (& other media) coverage and commentary about city boycotts, restaurant bans, and beyond.  Odds are you can't even scroll very far down your FaceBook news feed without seeing a rash of commentary on both sides of the political stance.  Here are two of my "favorite" pics I've seen there:

There is no question that there are seriously strong opinions at play on both sides.  But here's where I'm befuddled.  Promoting a "Food of Choice" day?  Encouraging all Americans to dedicate a day and go out and eat fast food to support your cause?  I can't help but wonder "What would Jamie Oliver think?"

[In case you are uncertain, Jamie Oliver is the fella who took on Huntington, West Virginia in the 2010 TV series "Jamie Oliver's Food Revolution."  Huntington was our American city that ranked highest in obesity.  Here in the past, I've written almost a dozen posts about Jamie Oliver and his quest to tackle the super-sizing of our waistlines .]

Here's what I personally think Jamie Oliver would say (& I haven't a clue--nor do I care--about his politics):


Instead of boycotting or promoting restaurants, why don't Americans write letters to their congressmen.  Additionally, why don't Americas boycott calorie-infested, energy-empty food?  THAT might solve a whole feast of problems, starting w/obesity in America. (Pun intended.)

One of the commentaries I have heard is that the Chick-Fil-A argument is about our First Amendment right of Freedom of Speech.  Agreed.  I've also heard it is a matter of voting with our dollars.  Equally agreed.  How we, as global citizens, spend out hard earned money should be not only a vote for our political opinions (as is being argued here on Huckabee's Chick-Fil-A day), but also for our health.  And unfortunately, due to convenience and often cost we don't always economically-vote in a healthy manner.  (Case and point: which is cheaper--a bag of potato chips or a bag of organic fruits and veggies?)  More times than not, we are shopping with time, convenience, and "crap food" rather than shopping with "health" in mind.

I have been traveling for nearly the last 2 weeks.  During that time, I have frequented a lot of fast food joints.  Healthy eating hasn't been my top concern, but rather maximizing the time I spent with the people I was visiting.  I must admit though, I have felt that choice in my body (high levels of saturated fat and sodium aren't my friend), in my lowered energy levels, and with the numbers that are popping up on my scale in the aftermath.  So for me, I'm not going to be frequenting any fast food restaurant today.

All that being said, here is another reason
I think I'll be hanging out at home as well.

Images other than Facebook post pics I have run across: Food in Education" poster from http://www.jamieoliver.com/us/foundation/jamies-food-revolution/home; "The New (Ab)Normal" from  http://www.feedourfamilies.com/2012/07/startling-facts-about-weight-our-future.html, "Childhood Obesity" Infographic from http://infographipedia.com/childhood-obesity-a-norton-center-infographic-eating-disorder-pro.html
Posted by Vicki at 3:33 PM