The House That ECS Built

The story of the 3 Little Pigs could have had a much different outcome had the pig family spent the day with Eagle Cove School on May 16th.  Those pigs could have gotten a lesson in sustainable building to make one heck of a wolf-proof straw bale house, had they combined their efforts and worked as a team!!

Lucky for us at Eagle Cove School, we got that tutorial and that experience from our Green Roof orchestrator, Mr. Rick Truett.  Last Thursday we were finally able to have our "hold-out assembly" from our ECS Earth Week (due to rainy weather rearing its head and causing us to postpone it).
Here's a YouTube example (to a much grander scale) of the process that Rick Truett directed our "10 yrs. old  and under" set to do. 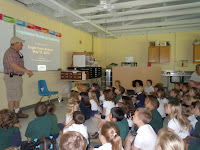 After a short info session complete with slides of what sustainable, renewable architecture and building looks like (and how some German "wattle and daub" houses have held up for over 800 years), the PreK to 4th grade students got their assignments for the day. They all involved pulling up their sleeves and getting a little dirty (if not a little straw-prickly)!

Second through fourth graders started out around 9:30 am by splitting into 3 groups:
1). The Foundation Builders moved some pre-used sidewalk slate rectangles to the building site to form the foundation. Muscles were heavily used! 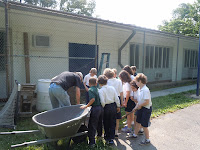 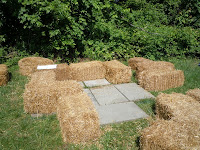 2).  The Soil Crew unloaded Mr. Rick's truck, with shovels in hand.  This dirt would be used to make the necessary mud later on. 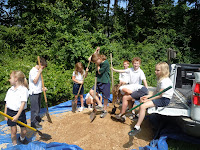 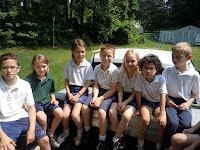 3).  The Straw Balers moved the straw bales to the site and started laying them in place, almost as if they were laying big prickly bricks. 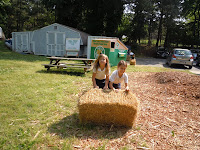 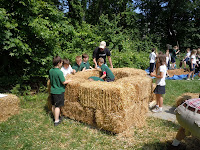 Metal poles were paced in the 3-4 layers of bales to pin them in place. The kids filled the corners between the bales with excess straw to make it even more compact, filling in all the gaps. 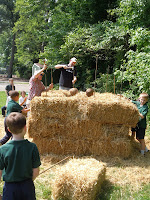 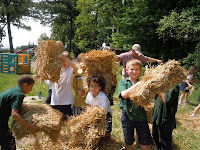 During lunch, our ECS Sci Guy and Mr. Rick placed some top beams and roofing in place so that the PreK'ers, Kindergartners, and first graders could start the dirty part of the program:  mudding the walls.  (Of course, if it was a more traditional hut, dung would have been added to the mix for additional strength and durability, but for obvious reasons, we skipped that ingredient!!)  Based on the twinkle in a few of these kids' eyes, I think the urge was strong to hug a teacher or two while covered from head to toe in mud! 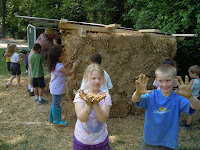 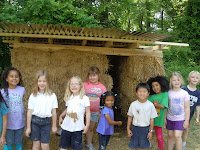 Time got the better of use (isn't that always the case), and the kids only got an opportunity to do about half of the exterior.  If given time to do it fully, inside and out and pack the mud into the outer layer of these regular Home Depot-style straw bales (as opposed to the much denser building-grade bales), Rick assured us that our structure could last up to 20 years.  Not to shabby for a structure built by our student population!!  As it is, this one will probably last a year or two before it starts to break down and biodegrade.  But, in the interim, it'll make for a fun homemade addition to our playground, teaching the kids a little bit about how eco-friendly and sturdy building can be--without the use of petroleum-based plastics which come from non-renewable resources.

I'm not sure how old those three Li'l Pigs were, but I think they could have learned a thing or two from our ECS four- to ten-year olds.  Our straw bale sustainable structure could (and maybe should) now come with not only a "green seal of approval," but also a "wolf-proof certification" too!!

All in total, reminds me a little bit about another structure ~ Check out this video from Hug It Forward.