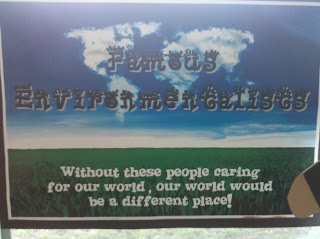 It's that time o'year again when yes, the birds are tweeting, the trees are budding, the flowers are popping, and spring is in the air.  But... that is NOT all!  'Tis also the season of my class' environmental biographies and the eco-parade of environmental leaders.

I love these 3 books from the Earth Heroes Series: Champion of the Ocean and Champions of Wildlife (both by Carol and Bruce Malnor) and Champion of the Ocean (by Fran Hodgkins).  They are fabulous and I have written about them in the past:
This year's Earth Hero Parade and powerful biographies included the following environmental leaders (as poignantly written by my ECS 3rd graders--kudos to my clever writers!!!): 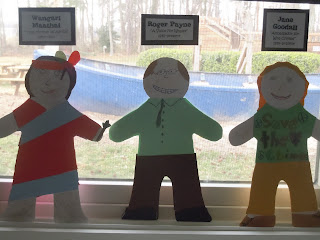 Wangari Maathai: "Wangari fought for equal pay for women.... She began planting trees in her own yard.  This was called the Green Belt Movement... She was a great environmentalist.  I hope she will go down in history."

Roger Payne: "Roger released an album called "Songs of the Humpback Whales" in 1970.... Roger still needs people to believe in whales. This is why Roger Payne is an Earth Hero."


Jane Goodall: "Jane was an amazing Earth Hero.... She saved the chimps... She was a United Nations Messenger of Peace... She has done a lot of things in her life we should be proud of, and we should be thankful for her." 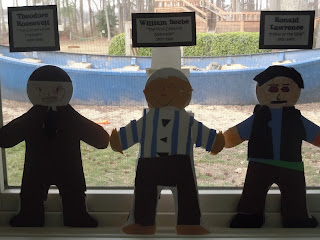 Theodore Roosevelt:  "The biggest thing he did was to become the 26th president... He thought it was very important to protect the environment.  That is why Teddy Roosevelt was a good Earth Hero."

William Beebe:  "He was one of the first people to go underwater in a bathysphyere.  He loved learning about ocean animals and sharing that information with others."

Ronald "R.D." Lawrence: "He loved the outdoors...  He was helpful in getting the Endangered Species Act passed.... I liked Ron because he studied and took care of wolves." 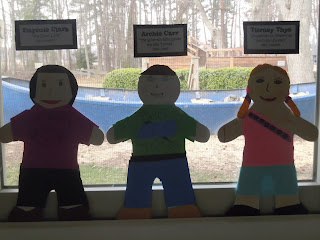 Eugenie Clark: "She was the first person to study the megamouth shark... She is still living today, and she is doing many things to help the ocean and help us learn about sharks."

Archie Carr: "He learned so much about sea turtles... He published ten books on turtles and nature.... Archie Carr helped the sea turtles of the world."

Tierney Thys:  "Tierney studied ocean sunfish for over 10 years.  She knew they weren't just a 'big floppy fish'... She is important because she did a lot for the environment by connecting people all over the world to her sunfish research and to oceanography."

Art pictures from my classroom, book images from Amazon.com
Posted by Vicki at 9:24 PM