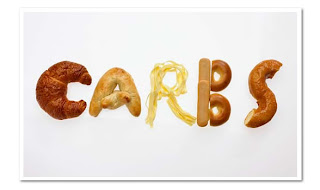 Over break I ran across an article entitled (and subtitled) “Put Down the Cookies, Santa:  Scientists Say Carbs—Not Fat—Are The Biggest Problem with America’s Diet.”

The ricocheted argument is back: Are carbohydrates on the naughty or nice list this year? Likewise, are fats getting the lump of coal or are an array of angels singing their praises?

To see the article all for yourself (in its entirety), go to http://www.grist.org/article/food-2010-12-20-scientists-say-carbs--not-fat--are-the-biggest-problem-with .

For the short version: coal goes to carbs, nice list goes to fats…well, sort of. You’ve got good and bad versions of both. Having watched "King Corn" and also having just driven to and through the Corn Belt this week, I’m reminded how corn-infused EVERYTHING is. I had a good friend in college who was allergic to corn and wheat (which is called “irony” in the 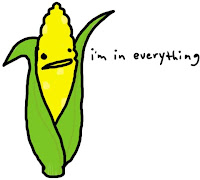 Midwest). It was then that I got my first glimmer of how invasive corn products are in the grocery store as we became label-readers: corn starch, corn syrup, high fructose corn syrup, corn oil, corn solids, monosodium glutamate (MSG), dextrose, corn-filler-fed meat... It's everywhere and in most everything.

I’ve had my own bouts of dieting/calorie counting/food & lifestyle changes.  The South Beach Diet, Mediterranean Diet

, or the very similar Sonoma Diet

win for me, largely because I've learned I don’t have a shut-off switch when it comes to yummy stuff like pizza, bread, French fries, and pasta (carb, carb, carb, and carb). Proteins and vegetables work well for me…you can eat a million of veggies given how low-cal they are. Two weeks off the carbs and I’m golden and can turn down the cookie tray (and even the Fritos)…if I’m inspired to be that much on my own bandwagon!  For me, I can see how eating the white starches and white sugars trigger the insulin and set my body into “fat storage” mode. Also, by eliminating prepackaged foods like packaged noodles and such, my blood pressure went way down due to steering clear from the sky-high sodium that’s in packaged products. I feel better when I’m eating fresher, healthier food!  And go figure…I have more energy too.

But, throwing the baby out with the bath water in never good. As a buddy told me (irate upon reading the above-mentioned article) fiber is found in complex carbs.  My pal reminded me that bad fats are just that--bad fats!   Fruits are good for you too--even though they are nature's sugar and carbs!

However, a look around Wal-mart in middle America shows you that our middles are growing wider and wider. We have a TV/gaming-oriented society that would rather sit and couch potato in rather than hit the great outdoors (anyone read Richard Louv’s Last Child in the Woods: Saving Our Children From Nature-Deficit Disorder

?). Doing that and eating super-sized portions, is it a surprise that Type 2 diabetes and obesity are on the rise? According to one statistic I saw recently, approximately 30-35% of our population is obese, and another 35% or so are overweight and getting close.  No wonder Michelle Obama started her "Let's Move" campaign (http://www.letsmove.gov/), and foodies like Jamie Oliver and Chef Ann Cooper are trying desperately to get healthier food in schools.

I also see all of the above influencing the waste (not just “waist”) problem in America. Gone to a restaurant lately and seen the portions they offer up?  Compare them to the true portion size that we SHOULD be eating! Yikes!?!  Add in, if you DON”T eat it all up right there, lucky you can take it home in a polystyrene (aka: non-recyclable styrofoam) clamshell doggie bag, typically bagged up in a single-use plastic bag too. And where do they both end up? Landfills and waistlines = waste, waist, and waste.

So ‘tis the season for New Year’s Resolutions. Based on fitness club commercials and the billions of dollars they spend post-holiday advertising (where memberships are at their highest, then dwindle about 4-6 weeks later with everyone’s failing willpower), health and fitness are on everyone’s minds this time of year.

Here we are--well past the holiday season, and Santa has moved on beyond the cookies.  Have you?  That gets us circling back to the "carb’ument"…to carb or not to carb? That IS the question.  Only you know for you. As for me, it goes back to the oldie but goodie: Eat less and exercise more. I’m going to work on greening my plate with loads of veggies, and wipe out the wasted calories of the "white stuff." But, I’m going to remember that those complex carbohydrates are fiber-filled and good in moderation. That and an exercise class with a partner in crime (to keep me honest with myself) will hopefully fill my plate, drop some numbers, increase some energy levels, and fulfill one of my New Year’s resolutions!
* * * *

For an additional read on Michelle Obama's "Let's Move" program and the controversy a healthy eating platform can bring when it comes to political warfare, read Fred Hiatt's Washington Post article from December 25th entitled "How did obesity become a partisan fight?"
http://www.washingtonpost.com/wp-dyn/content/article/2010/12/26/AR2010122601697.html?referrer=emailarticle .