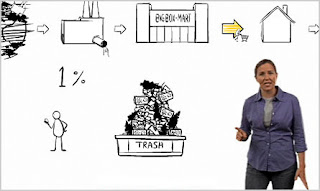 Walking into DC's Politics & Prose bookstore (and local gem in Washington, DC for over 25 years), I'm not sure why I was startled to find standing-room-only for their 5 pm speaker event on a Sunday afternoon.  Especially when the speaker was Annie Leonard... someone who has become an internet phenomenon over the past few years with her animated documentary "The Story of Stuff."  With over 10 million hits to her film, a packed room in a political town was truly a no-brainer.
Annie's quick pace, positive spirit, and sense of humor made for a rapid fire of stories about how she got to where she is now, both with the film and the new release of her book by the same name.  I think she truly has her finger on the pulse of where we are and -- more importantly -- where we need to be.  A recurring theme in her talk was about the interconnections of issues.  You most certainly don't need to be an environmentalist per se to be concerned about the environmental issues.  It's connected to the issues of production, health care, consumption, economy, personal satisfaction, time we spend working/making money (and conversely time away from our family), and our role as citizens in our communities and our planet.
Other nuggets of memorable moments from Annie today:
Annie sees a change as not only a necessity, but inevitability.  Given we're using natural resources at a rate of 1.5 planets per year (and gee folks, we only have one planet per year to use), change is on the horizon "by either design or by default."  Seems wiser to be the designers & decision-makers.  Hence the reason there's a boat out there in the San Franciscan Bay that's readying for a journey to show that reclaimed bottles can be constructed into something purposeful like the Plastiki.  Hence why we need to rethink what it is we buy, and honor it, rather than trashing it a season or two later.
More people need to be part of the conversation, making connections.  Annie Leonard's "The Story of Stuff" is helping to make that happen!
My ode to you, Annie Leonard....
(sung to the tune of "the Brady Bunch")
Here's a story, of a gal named Annie
Who admits she's obsessed with garbage & waste.
Who saw a need to do something about it
Before our planet became utterly disgraced.
Till the one day when this lady made a movie,
To share her eco-knowledge "off the cuff."
That little film turned into a sensation
That's the way we've come to know "The Story of Stuff."
"The Story of Stuff," "The Story of Stuff..."
That's the way we've come to know "The Story of Stuff."
If you haven't seen internet film "The Story of Stuff" yet, find 20 minutes to do just that!  Click the title link above or go to http://storyofstuff.org/index.php.  There you will also find Annie Leonard's presentation of "The Story of Cap & Trade" and the upcoming "The Story of Bottled Water" (coming out on World Water Day, March 22nd, 2010). By joining their mailing list, you'll get email notification when new movies come out (& there are a handful in the works!)
picture from a scene in Annie Leonard's www.storyofstuff.org
Posted by Vicki at 12:00 AM