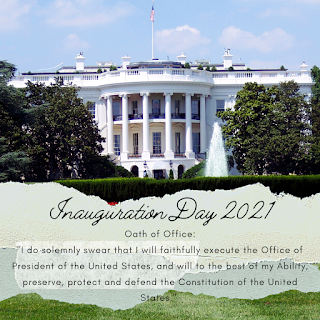 January 20th every 4 years we have the American tradition of transferring (or continuing) power based on public elections every four years. The reason: we are a Constitutional Federal Republic, with state and national governments where we elect representatives to exercise the power of the people and our laws are based on the US Constitution. The 20th Amendment (adopted January 23, 1933) moved the Inauguration date from March 4th to January 20th every 4 years.

Dating back to 1801 and our second president John Adams, we have had a peaceful transition of power at the heart of our government, national election, and inauguration. The reason it fell on our second president is that our first president, George Washington served his two terms and then opted out of presidential limelight. John Adams, former friend and now political rival to 3rd president Thomas Jefferson, was not a fan of his predecessor at this point; however, he set the stage for a peaceful transfer of power in our country. Based on his example, it is now a lasting piece of our democratic history for this political "passing of the torch" to be peaceful for the sake of our country. 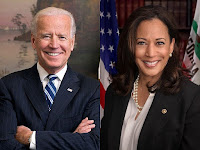 While this year (more than ever before) has been fraught with drama and controversy in this department after a volatile, partisan election season and sadly the insurrection in January 6th. Not everyone comes to today as happy campers, however in the events from two weeks ago, we are more wide-eyed and aware of what can happen when people get out of control.
Ready or not, Inauguration Day is here. It is on Inaguration Day today that we watch President-Elect Joseph Robinette Biden Jr. become President Biden; and, we make history as we have confirm our first African American, Asian American, female Vice President Kamala Harris. Together they pledge to be a Presidential team that unifies rather than divides.
Watching it via multiple channels on the TV, live stream, and Internet will be easy here this Inauguration Day, where crowds in DC will be kept down due to both health concerns of the pandemic and the invasion of the Capitol on January 6th.
In the meantime, here are some fast facts on the Inauguration that you might not have known.
Inauguration image created at Canva.com, Kamala Harris and Joe Biden image from https://www.sacurrent.com/the-daily/archives/2020/11/07/well-known-san-antonians-react-to-joe-biden-and-kamala-harris-winning-the-white-house, videos from https://www.youtube.com/watch?v=VO2YCcyMOfI and https://youtu.be/0pokIWTuQi4
Posted by Vicki at 1:30 AM