When Less Is More

I've just finished reading"The Year of Less: How I Stopped Shopping, Gave Away My Belongings, and Discovered Life is Worth More Than Anything You Can Buy in a Store" by Cait Flanders. In it, she details a life of minimalism and how she arrived there in one year with by imposing her own "shopping ban." In truth, it also details her several-year "journey of less" in all aspects of her life. Less shopping, less clutter, less debt, less food & snacking, less weight, less mindless TV watching, less social media, less drinking, less work, and much more.

Minimalism has always piqued my interest--as evident on my bookshelf (filled, ironically, way too many books) but in titles such as "Simplify Your Life" and "Inner Simplicity" (both by Elaine St. James), "Essentialism: The Disciplined Pursuit of Less" (by Greg McKeown), and "Simple Abundance" (by Sarah Ban Breathnach). I've watched  "Minimalism: A Documentary About Important Things." But it sometimes is hard to be a true minimalist when you have teenagers and a husband and a dog, all of whom have differing opinions. 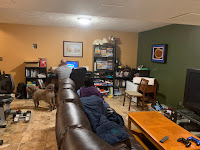 It wasn't intentional, but I ended up reading Cait Flanders book right after spending 30 man-hours this summer with all of the above participants (minus the dog) overhauling the basement. When you have teenagers,  you don't necessarily need the "Magic Treehouse" books, or Lincoln Logs, or Playmobile guys, or dress-up costumes, or stuffed animals anymore. It was a process that was probably at least 5 years overdue. I tend to be very organized, so I can organize a lot of stuff and not look like a hoarder. However, we had certainly surpassed that point in the basement. It was a big job. And it stunned me a little bit thinking of all the money over the years that had gone to all of this stuff we were getting rid of. But, as my husband reminded me, it served a purpose at the time, and that time had passed. This certainly was a strong tie in to Cait's own realizations and her journey as well. 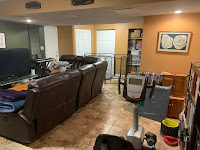 I tackled the lion share of the job, but I couldn't even start the project on my own due to overwhelm. As a family, we created 4 blocks of time where all four of us worked for only one hour at a time, cranking through as much as we could in that hour. Those blocks of simultaneous 4-man-hours helped accomplish a lot in a concentrated time. They cut through my sentimental "maybe we should keep it" moments. They were far more cut-throat! Multiple truck-loads of stuff were donated--bags of books included. Old crafting items went to school to be up for grabs. Several bookshelves were grabbed from the curb by our neighbor. We still have a pile of stuff that we're considering selling (or it may come to donating) as I'm really just ready to offload those items. 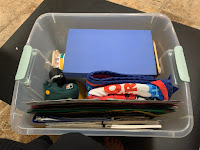 The memorabilia was my hardest part, with boxes of never-scrapbooked items, but I organized those into one tub per child of keepsakes. Apparently I thought it'd be a good idea to save every kindergarten handwriting page my daughter ever wrote, so we had a lot of recycling as well.


The room is still a work in progress as we have some odds and ends to fix (one of which may involve a handy man), but it is a world of improvement. It's not overstuffed and cluttered. It's actually spacious and inviting. It goes with Cait's concept of "Whenever you let go of something negative in your life, you make room for something positive." Likewise, as I was wrapping up Cait Flanders' book last night, I reflected on some of her broader thoughts. The basement overhaul has been tied also to my daily treks on the exercise bike (also in the basement) to improve my overall health and stamina--which in turn has started helping to shed a few pounds. This, in turn, has also led to more veggies on my plate. Cait's quote "Every small change you make pays compound interest. It helps you make another change, another mind-set shift, another decision to live in a new way" seemed to be whispering right to me. Ironically too, it's cropped up as I'm simultaneously reading James Clear's "Atomic Habits: An Easy & Proven Way to Build Good Habits and Break Bad Ones."

Having never been much of a shop-a-holic, both Cait's book and my basement have led me even further away. I don't need more. We have enough. Along those lines, I'm trying to read more books on Kindle (including Cait's) as books are my shopping downfall! I'm grateful for what we do have, and I know that some of our stuff will be the same stuff we will later be getting rid of. The landfills truly don't need more, and I wonder how much I'm greenwashing myself with all my donations simply to avoid seeing someone else throw them away! In reading Cait's journey and taking my own, it makes you look at your priorities through a fine-toothed comb... and that was only my basement!

You can learn more about Cait Flanders on her website or by following #TheYearOfLess in social media. Maybe it, or my basement story, will inspire you to make the best out of "less" in your life.


Cait Flanders' book cover from https://www.amazon.com/Year-Less-Shopping-Belongings-Discovered/dp/9386832933 & all other photos from my phone & basement.
Posted by Vicki at 1:30 AM