Things that are important are worth doing, doing well, and spending valuable time on. 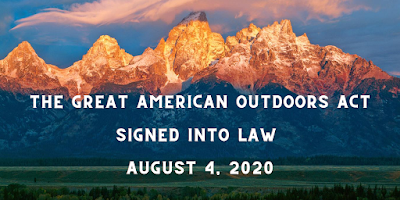 Since 1964, 5+ decades worth of time has been spent by members of Congress, environmental activists, businesses, and more to do just that to support the Land & Water Conservation Fund in order to bring the Great American Outdoors Act to fruition. I happen to know one of the key players who was working hard for at least the last eleven years to push through this Act and get it to the President's desk. I know she was doing a lot of celebrating this spring as the bill passed each of the following:


What will the Great American Outdoors Act ensure? It sets aside major funds to safeguard & protect parks, forests, and trails on the local, state, and national level, without a 50 year time restriction (as has been done in the past). For the next five years, $1.9 billion per year will come from energy development revenues to provide facility maintenance and infrastructure assistance for "national parks, forests, wildlife refuges, recreation areas, and American Indian Schools. It will also use royalties from offshore oil and natural gas to permanently fund the Land and Water Conservation Fund to the tune of $900 million a year to invest in conservation and recreation opportunities across the country."With over 325 annual visitors to the national parks, repairs are backlogged (to the tune of $12 billion), and this money will go far for improvements.

For some it may be a bit of a surprise given Trump's environmental track record, especially when his administration worked in the past to shrink protections from national monuments such as the Bears Ears National Monument, the Grand Staircase-Escalante National monument and the Northeast Canyons and Seamounts Marine National Monument. According to The Hill, Trumps' reversal stems from the fall re-election of Senators Cory Gardner (R-Colorado) and Steve Daines (R-Montana) and hoping to hold those seats in the Senate.

To celebrate, this year all public land fees were waived on August 5th, and going forward the same will hold true for all future August 4ths to commemorate this environmental win. 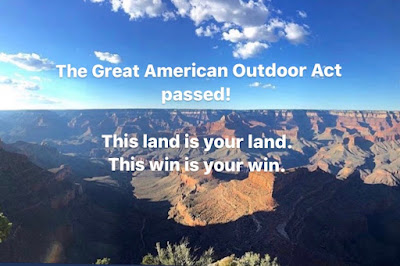