I was a big fan of Barbies when I was a kid. It makes sense--it was the 1970s and Barbies were an "it toy" for girls. I had a 2-story doll house that someone had made, and one of my prized parts of it was the staircase that my dad had built to set next to the garage so Barbie and Ken and the crew could get up to the 2nd floor. (I mean really, what kind of house like that didn't have steps?) 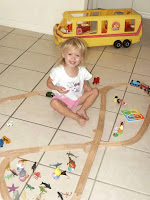 I also had the fuschia Corvette and the barbie camper, and I remember zipping around both all over my house

Fast forward 30 years, and the Barbie camper & car made their way under my adult Christmas tree for my preschool daughter. Cleaned up by my dad after years of living in the attic, the vintage "Barbiemobiles" were in lovingly restored. 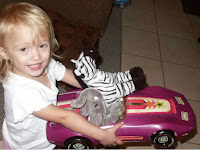 However, my daughter, always more of a tomboy, was never a fan of Barbies. Instead, her stuffed animals went tooling around our house in the Barbie camper. Barbie had been replaced in our house by my critter-lovin' girl.

Fast forward another good dozen years or so, and there's potentially a new generation of Barbie-camper-drivers out there. Mattel and National Geographic have teamed together to create a new Barbie product line based around "exploration, science, conservation, & research." In the mix is "Ecologist Barbie" (or officially named "Wildlife Conservationist" Barbie). My daughter has well passed the age of driving her stuffed dogs around in the Barbie camper, but I love this idea. Barbie routinely has gotten her feminism on and taken on new adventures, and here we are again, with a new role of scientist and explorer in her credentials and curriculum vitae.

Nalini Nadkarni, forest ecologist and canopy scientist, is part of the current promotional team of Mattel & National Geographic highlighting the explorer series of the new Barbie line and the wildlife conservationist Barbie. Other Barbies in this series include an astrophysicist, an entomologist, a polar marine biologist, and a nature photojournalist.


Nalini, had long tried to get Mattel to embrace an idea of "Treetop Barbie." They didn't buy into it, so she created a line of her own via resale shops and constructing her own outfits in the early 2000s. Although not affiliated with Mattel, she got them to let her continue and she sold approximately 400 over the years.

From her 2009 TED Talk (where she discussed her created her own repurposed Barbies from thrift shops that she outfitted in outdoor gear to produce the dolls on a small scale): "My feeling is that we have taken this pop icon and have just tweaked her a little bit to become an ambassador who can carry the message that being a woman scientist studying treetops is really a great thing."

About 15 years later, she was finally invited to serve on National Geogrpahics and Mattel's advisory committee to come up with an "adventure series" of Barbies. What better way to inspire girls to embrace alternatives to traditional gender roles and careers.

To read up more on Nalini Nadkarni's current venture with Mattel, check out these two articles:

Plus, don't forget to check out the Barbie Explore page on Mattel.com.

Or, watch Nalini's 2009 TED Talk to learn more about the inspiration for Conservation Barbie:

Video from https://www.ted.com/talks/nalini_nadkarni_conserving_the_canopy?language=en, Barbies from https://barbie.mattel.com/shop/en-us/ba/barbie-wildlife-conservationist-doll-gdm48, other pics from my camera.
Posted by Vicki at 1:00 AM