Earth Hour is around the bend-- just over 2 weeks away! It's one of my favorite "environmental holidays." Why?

1. I love the grass roots growth element of it.

2. I'm energized by its expansion over time, from Sydney, Australia alone in 2007 to an exponential fire burst of every country being involved in just a few short years--most recently, over 180 of the 195 world countries and territories.

3. It's like a virtual "wave" across the globe, in your time zone on Saturday, March 30th, from 8:30-9:30 pm, where your lights go out and you keep passing the (extinguished) torch! In doing so, you are messaging the world that climate change and our planet Earth are important!

4. You can make a small yet powerful statement in your time zone, giving an hour to "unplug," which then ties to the tech-side of GTG.

5. It's a positive event. A non-partisan, taking-action kind of way of raising awareness. You can do it it a big or small way, and be part of a global movement. This feels good, making your voice heard.

6. I've been taking part in Earth Hour since the 3rd one, in 2009 (including speaking to the Maryland House of Delegates Health & Government Operations Committee in 2011. By this point, it's now a time-honored tradition!!

Earth Hour has a slew of resources--here are some handy links to help you out.

Looking at the latest reports over the last few months, general consensus puts us at a dozen years away from being at the tipping point. (Need to verify that stat? Check out these resources on climate change to verify why it is indeed important):
The Guardian (10-8-18): "We have 12 Years to Limit Climate Change Catastrophe, Warn UN" 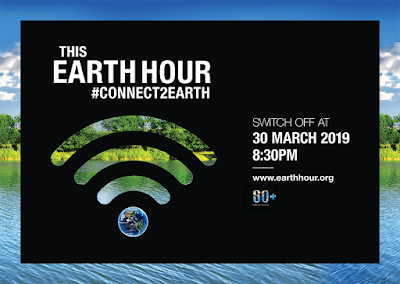 Earth Hour banner and poster from https://www.earthhour.org/, video from https://youtu.be/wQ6S-pkbgB0
Posted by Vicki at 1:04 PM