How South Can You Go? Antarctica! I've said it time and time again: I love my job. I get to work with all at my school, from Kindergarten to 5th grade, and sometimes even Preschool and Pre-K too. Because of that, I know the wealth of topics they cover, and I have light-bulb moments when I see that I can connect these classes to each other and to brilliance.

This all happened last week! 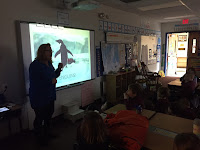 With the help of social media, I saw that our former school's Communications Director just returned from a 2-week adventure in Antarctica. During her trip in January, Antarctica's summer, temperature highs are at 35 degrees. What do you know: some of our first graders just completed a reading group unit where they researched penguins... and our 5th graders currently were knee-deep in an Antarctica study based around Sir Ernest Shackleton's expedition. 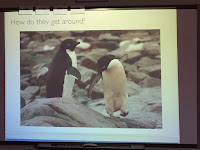 So we brought in our local hero and Antarctic explorer, Kristyn Kuhn. She had spent 2 weeks on the National Geographics-sponsored trip to Antarctica. Her main desire: to see the continent while it is still there. We, as 1st and 5th graders, got to take advantage of her experience. 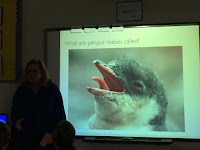 Kristyn visually revealed penguin insight & information to the 1st graders. Later she shared overall Antarctica geography & exploration to the 5th graders. (Kristyn's pictures were amazing--she should be a National Geographic photographer herself!) She also shared that each night of her trip, the NatGeo leaders had talks on different science-based subjects. Not until the last evening did the words "climate change" actually come out. Those words purposely are only shared late in the trip--otherwise they are an apparent deal-breaker amongst the closed-minded in the group.

The 1st Graders were in awe of the penguin photos and facts. Given the research from one small reading group of 6 year olds, the students had a lot of expertise from arkive.org and other resources. They knew details on Fairy Penguins, Rockhoppers, Emperors, Macaronis, and more. Kristyn was blown away with their knowledge. A major favorite of the day was when Kristyn led them to scurry in as huddled penguins in search of warmth. We all got to feel like one in the masses, like in the photo below. 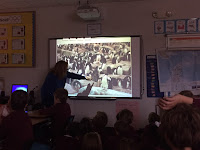 From there we shifted to the older set: 5th graders, at the opposite end of the elementary spectrum. Kristyn had photos that basically took us back to the 1940s and the abandoned expedition sites... literally frozen in time--canned butter and all. We all were faced with the question: "To zoom back to Ernest Shackleton's time over a hundred years ago, 30 years prior to these pics...what must it have been like, at the bottom of our planet, way back then?" Her photos and Antarctic experience helped vividly paint that mental picture. 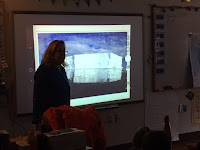 With both grade levels, Kristyn shared that her ship on this trip had traveled further south than ever before. Why? Because climate change had paved the way, melted the ice, and made it happen.  A southern passageway the planet hadn't ever seen before.

This is not a good thing. 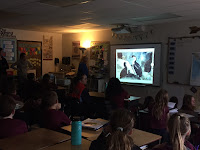 After hearing both sessions and all of Kristyn's experiences, this Green Team Girl was itching to head way down south to see the pearl blue ice of Antarctica. If you want to research more about what this trip looked like (and/or to book it yourself), you need to head to National Geographic. It sounds memorable... and it totally makes me want to go!

It reminds me too: we all need to travel, experience the world, embrace the science, and learn as we go! 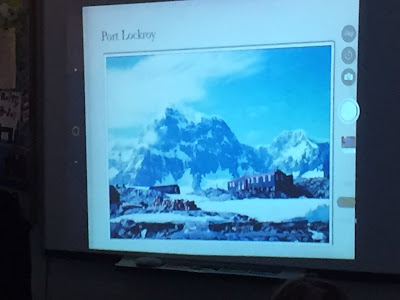 Photos by me of the photos Kristyn she shared of her Antarctic photos and adventures!
Posted by Vicki at 12:01 AM