The Day The Faucet Dries Up 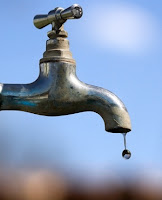 Cape Town, South Africa is currently between a rock and a hard place. They are at a critical water crisis due to historic drought, leaving their 4 million people fearful about "Day Zero"... the day when the water is done and dry and officially turned off at homes and businesses. Right now that day is slated for May 11th of this year. Less than 3 months away. Scary.

At Day Zero and beyond, citizens will need to hit up one of the 200 ration points in the city to collect water. Daily limit will be set at about 6.5 gallons of water. That's hardly enough for the drinking, cooking, bathing, and toilet use they'll need each day.

Here in America, this is what 6.5 gallons of water get you (you get to pick only one of the following):

Or, this graphic from the Water-Use It Wisely Twitter Page is striking (from March 2017) 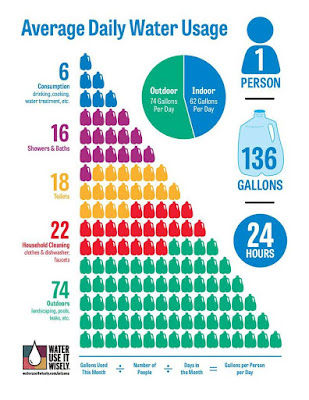 But Cape Town is not alone in water crisis. Here are 11 other cities that run the risk of following in the same footsteps:


"Despite covering about 70% of the Earth's surface, water, especially drinking water, is not as plentiful as one might think. Only 3% of it is fresh.  Over one billion people lack access to water and another 2.7 billion find it scarce for at least one month of the year. A 2014 survey of the world's 500 largest cities estimates that one in four are in a situation of "water stress."According to UN-endorsed projections, global demand for fresh water will exceed supply by 40% in 2030, thanks to a combination of climate change, human action and population growth."